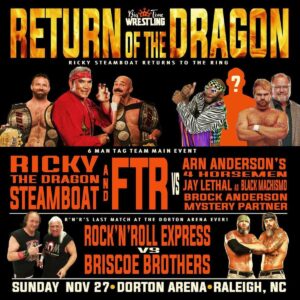 It’s apparently the year of pro wrestling legends having (at least) one more match, as it’s been officially announced that Ricky “The Dragon” Steamboat will return to the ring for Big Time Wrestling in November.

The “Return of the Dragon” event will take place at the Dorton Arena in Raleigh, North Carolina, and now we know that the main event will see Ricky Steamboat team with FTR to take on “Arn Anderson’s 4 Horsemen” – Brock Anderson and Jay Lethal along with a mystery partner. It must be truly surreal for Jay Lethal who just participated in Ric Flair’s Last Match a couple of months ago, and will now step into the ring with Steamboat.

We reported backing May that Ricky Steamboat turned down an offer to wrestle in Ric Flair’s last match, citing that he didn’t want his return in 2009 to be tarnished. Apparently, things have turned around as Steamboat is stepping into the ring at least one more time at the age of 69. Steamboat may have made the right call after seeing Flair’s performance, and it’s quite possible that he didn’t want to take part in the health risks that came with Flair stepping into the ring at age 73.

Now Steamboat will get his own night to shine, and tagging with one of the best tag teams currently in wrestling can’t hurt. After his series of matches in 2009, we questioned why Steamboat wasn’t still actively wrestling, simply because he was still that good. Here we are in 2022 where it’s been 12 years since Steamboat has stepped in the ring, and it still feels like The Dragon still has a little something left. Will it be Ricky Steamboat’s final match? That may be decided after we see how things go on November 27th.

Ricky “The Dragon” Steamboat is returning to the ring for #BigTimeWrestling on Nov 27th! He comments for the 1st time on his impending match!
PLUS: Rock N’ Roll Express vs. The Briscoe Brothers
Many more matches and SPECIAL GUESTS to be announced!
Tickets: https://t.co/8ZkIkkNq6d pic.twitter.com/UScd0OVul9