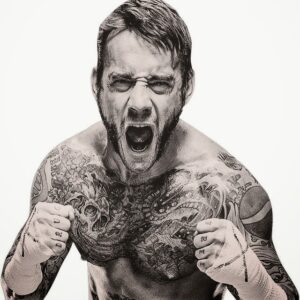 In a move that is sending shock waves through both the wrestling and MMA worlds, CM Punk has announced a multi-fight deal with UFC that will see him compete in 2015.

The signing comes on the heels of probably the most talked-about wrestling story in the past year which was CM Punk leaving WWE and then just this past week finally revealing his reasoning for leaving WWE and how he REALLY feels about the company’s management.  The topic was even brought up to Vince McMahon last Monday on the “Stone Cold Podcast” with Steven Austin where McMahon said he hoped he and Punk could work together again in the future – it looks like that won’t be happening anytime soon.

Punk appeared on the UFC 181 PPV with Joe Rogan and announced he has signed a multi-fight deal and that he will be fighting at the middleweight or welterweight division.  Punk does have a history in MMA training has he’s revealed he has a background in Kempo and Brazilian jiu-jitsu, so anyone that thinks this is just a random thing can think again.

One thing is for sure – CM Punk is money right now and he will do big business for UFC even if it’s for 1 or 2 losing efforts in the Octagon.  Hearing “Cult of Personality” hit in a UFC arena is going to be a big deal and the crowd reaction will prove that.  The buzz around this is going to be something special just like it was in Brock Lesnar’s UFC career; sure Punk will have naysayers, sure they will call him a fake wrestler and predict he will get his ass kicked….but those same people will all want to see him fight regardless just like they did Lesnar.

UFC President Dana White confirmed that he’s been talking to Punk for quite some time and this isn’t an “out of nowhere” type of deal; I think Dana sees the potential here, but it also sounds like he’s going to make Punk prove himself in the Octagon.

So anyone that thought CM Punk/Vince McMahon/Triple H etc. were working some huge wrestling angle, this signing pretty much puts all of that to rest at least for the time being.  Punk has stated that his pro wrestling career is over and MMA is 100% his career now.  The thought of Punk actually doing well in MMA and bringing over some crossover fans is going to be really interesting and we can’t wait to see how this plays out!

**Update – Here is the video of CM Punk’s UFC announcement**