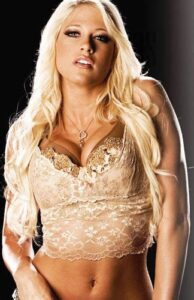 The title says it all for this post. One of the most popular topics we get requests for is more posts on nudity from WWE Divas and former Divas, some of who are now TNA Knockouts. Whatever the case, it’s apparent from our research that many of you want to see the WWE Divas with no clothes.

Now if you are offended by this sort of thing, we advise you skip this post even though we will keep things clean here on this site and only link to the adult content many of you have requested. Below we are going to highlight some of our past posts on Diva/Knockout nudity, as well as link to some known posts on other sites. Hopefully this will answer some of your questions as to which Divas have gotten naked at some point.

We will probably update this post as new nude content surfaces, just remember, don’t click if you are easily offended by adult content. We kick off with our most popular post on this site ever that highlighted the past of Mickie James: