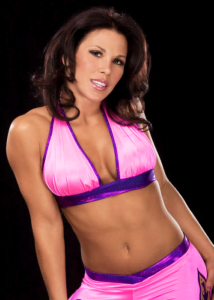 This is definitely the wrestling related humor for the day. This morning on a St. Louis radio show, Mickie James was a call in guest, discussing everything from RAW being in St. Louis this past Monday, her hectic schedule, her guest appearance on “Psych,” oh, and the little fact that she’s posted in some extremely hardcore pornographic pictures years ago for “Legshow Magazine.”