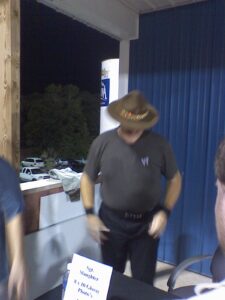 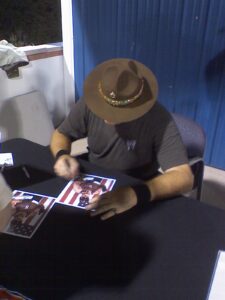 My post about Sgt Slaughter at the Shorebirds Game received a little bit of attention from major sports blogs. I thought I would update with some more pics my friend took of Slaughter. These are camera phone pics. He took some pictures with a real camera but didn’t send me those.

Background:
The Delmarva Shorebirds are a single-A minor league farm club of the Baltimore Orioles. They were originally affiliated with the Montreal Expos in 1996. When they built the stadium in Salisbury, Maryland, I was in high school and it was a big deal in our local area. The games were always sold out with many people in standing room only general admission. Future Expos Orlando Cabrera and Javier Vasquez were on that team. The 1997 team became affiliated with the Orioles and had some future big leaguers like Calvin Pickering and Ryan Minor but no one with a significant career. Ryan Minor is a trivia answer because he ended up starting in place of Cal Ripken when he decided to end his streak.

Apparently, a few people still go to Shorebirds games. I wouldn’t know because I moved away several years ago. The last game I went to was probably less than 40% capacity. My friend happened to be at this game and Sgt. Slaughter was there signing autographs.

I’m sure you all know who Sgt. Slaughter is. If not, maybe the Midnight Writer can fill you in somewhere in his Remember When Wrestling Series like he did with Miss Elizabeth Joining Macho man Randy Savage and Ron Simmons winning the WCW World Title.