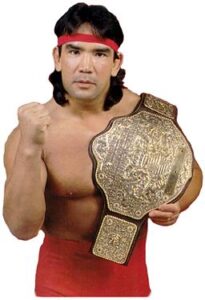 For anyone that saw WrestleMania 25 or even RAW the night after, Ricky “The Dragon” Steamboat had his first matches in 15 years. The RAW match was most likely due to his performance in the Mania match. Going into WrestleMania 25, the Chris Jericho storyline was great and many of us were guessing for weeks as to just who would face Jericho at Mania. Austin? Hogan? Lawler? Mickey Rourke? Well, we were all pretty let down that it would just be a legends handicapped match against the legends Jericho had already beaten up on RAW. We’ve seen Jimmy Snuka and Roddy Piper plenty of times make special appearances on numerous RAWs and pay-per-views. But the one standout part of the whole scenario was Ricky Steamboat.

Steamboat had his last match in 1994 against Steve Austin and hadn’t wrestled since. Steamboat of course is brought up every year around WrestleMania time with everyone of course bringing up the legendary WrestleMania 3 match with “Macho Man” Randy Savage. This year, Steamboat was set to receive the ultimate accolade, induction into the WWE Hall of Fame. So when it was announced that Steamboat would actually be wrestling, the thought alone was a very special thing. Steamboat probably wouldn’t be what he once was years ago, but still, I personally believed a Jericho vs. Steamboat 1 on 1 match would’ve had more intrigue.

The surprising thing was, I was wrong about Steamboat not being what he once was….other than gray thinning hair, Ricky Steamboat came to WrestleMania and blew everyone away. “The Dragon” stepped in the ring at WrestleMania and brought the magic back with him. Steamboats performance, doing his signature chop and high crossbody from the top rope were a complete 20-year flashback. Steamboat made it clear, that while Piper and Snuka were understandably slower than they’d been, Steamboat’s “still got it” and the fans let him know – the “you’ve still got it” chant was awesome, it was like finally, Ricky Steamboat was getting the recognition he deserved on the grandest stage of them all.

Steamboat lost to Jericho, but in reality, Steamboat scored the real victory as it was apparent that the fans weren’t the only ones who recognized Steamboat still had the magic in the ring as RAW opened up the following night with the announcement that there would be a “WrestleMania MVP” 8 man tag match and Steamboat was in there teaming with Cena, CM Punk, and Mysterio. You could tell Steamboat’s partners for the night were in awe that they got to team with the legend in this match, and when Steamboat was tagged in, he turned the fire on, chopping away on everyone, selling as only Steamboat can, and taking part in the finish with Rey Mysterio.

In the end, Steamboat got the proper send-off as his teammates left him in the ring to get the spotlight one more time while he received one more ovation as he soaked up the respect of the wrestlers and the crowd. The question here is, Steamboat stepping in the ring and performing got people talking, people were given what they wanted to see, and that’s something not many wrestlers today can do, so why is Ricky Steamboat not on the roster for another year or so? The perfect underdog that can still go. I’m sure injuries forced Steamboat into retirement in 94, but now it seems The Dragon is ready to go for one last run. The send-off Steamboat got on RAW almost seemed like a farewell (although Steamboat still works for WWE behind the scenes,) but I think WWE seriously needs to consider having Steamboat have one more run because I myself would love a year full of Steamboat vs. Michaels, Triple H, Punk, Mysterio, etc. matches. Steamboat’s still got it, and we want more!