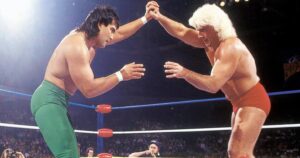 Earlier this week the report that Ric Flair was wrestling one final match in July made headlines across the globe. It wasn’t long before rumors about what the match would be were running rampant. It was all but confirmed that the target match would be Flair teaming with AEW’s FTR against The Rock ‘N Roll Express and a partner; just hours later the partner was rumored to be Ricky “The Dragon” Steamboat.

A new report from WrestlingInc.com confirms that Steamboat was indeed offered the spot to participate in Ric Flair’s final match, but has declined the offer. Steamboat cited not wanting to tarnish his 2009 return at WrestleMania 25 and subsequent matches with Chris Jericho that were highly praised as the reason for not returning to the ring. We even questioned on this site at the time why Steamboat wasn’t still wrestling full time back then since his matches were still so good.

Steamboat turning down the offer to return to the ring at Starrcast weekend may actually please some, as many of you have been outspoken on our Facebook about Ric Flair staying out of the ring at his age and medical condition. Ricky Steamboat, aged 69, has opted to do just that.

The next question will be who will step into Steamboat’s proposed spot if the 6-man tag is still on the table. Sting would make sense given his history with Flair including the final Monday Nitro match. Hulk Hogan is probably less likely given this is being promoted under the Jim Crocket Promotions banner and is leaning more toward paying homage to the glory days of the NWA. Someone like Dustin Rhodes could fit the role given the family history, and any number of former Flair opponents could also fit, but it will be impossible to match the magic that would’ve been there for one last Flair/Steamboat encounter.

Ric Flair’s last match will happen on July 31st in Nashville, TN, and will air on FITE.