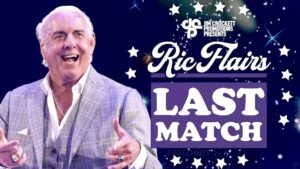 The buzz continues to grow for “Ric Flair’s Last Match” which takes place on July 31 in Nashville, Tennesse. Of course, there is a lot of question as to who will be involved in Flair’s match, but what about the rest of the card? Would it be all former Jim Crocket Promotions talent? Would it be talents that Flair has encountered throughout his career? Today, we have some idea as two matches have been announced for the card.

The first announced match will be an inter-promotional match that will be a first-time meeting as Impact Wrestling Champion Josh Alexander defends his title against MLW’s Jacob Fatu:

So this card appears to be shooting for the stars as far as match quality and should make for a wild environment in front of a packed house in Nashville. Also, in case you missed it, a press conference was held this morning in Nashville to promote the event and featured Jeff Jarrett as a member of the team making this show happen, even though he is currently employed by WWE: