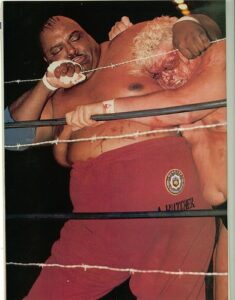 When we talk about unique, different, special, even bizarre…Abdullah the Butcher is the first wrestler that comes to mind. A wrestler that was (and still is) legitimately feared. Abdullah the Butcher was scary, there is no argument. 1 look at a huge wildman chasing his opponent with a fork, most of the time covered in blood, and the fear was there. No one looked at Abdullah the Butcher and thought ANYthing he did was fake or that he was just pretending. Abdullah looked like a murderer in the ring, hence the reason fans ran in all directions while Abdullah brawled through the crowd.

The first time I saw Abdullah, was during his classic and never-ending feud with Bruiser Brody. The site of these 2 wild men who didn’t look like the normal everyday guy you’d see walking down the street, brawling, bleeding, grabbing anything they could to use as a weapon, it was really something that hooked me on wrestling. Sure you had some great in-ring wrestlers, the world champions, but it was intriguing to think about what would happen if this great wrestler was up against the Madman from the Sudan. The champ could wrestle, but how would he take on the Butcher with his weapons and brawling…its the intrigue that followed Abdullah his entire career, never a dull moment.

These days you can see an “extreme rules” match or “hardcore” etc., but the wrestlers all pretty much look alike, the WWE-style bodybuilders. Gone are the days of legit scary-looking badasses who get in there and make you believe. It’s too bad, because just the thought of Abdullah the Butcher vs. Brody, Dusty, Funk, The Shiek, etc. is what really makes fans say “Wow, I really want to go buy a ticket to see THAT!”

Here are a few great clips of the greatness of Abdullah the Butcher. This type of action still blows a lot of the current product away.