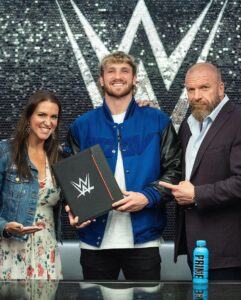 As noted in our coverage of WrestleMania 38 Night 1, Logan Paul was a breakout performer that night and showed he could be a big star in wrestling if he chose to be. Well, that day is here as Logan Paul has officially signed with WWE.

This news is actually pretty surprising – sure you could say that this past Monday, WWE laid the groundwork for Logan Paul to return to WWE for SummerSlam either as the opponent or partner for The Miz, but actually signing with the company didn’t seem like it’d actually be on the table. Not because Paul doesn’t have all the tools to be a huge star, but simply because he’s involved in so many other ventures. From boxing and podcasts to everything else involved with being a massive social media influencer, being contracted to WWE even on a semi-regular schedule was unexpected.

While Logan’s signing means he’ll likely have a limited number of WWE dates that will mostly be PPV and TV events, it still means he’s done with his high-profile (and big money) boxing career that was doing huge PPV numbers. As seen in the photo above, Stephanie McMahon and Triple H are front and center for this signing which puts some (likely needed) spotlight on them as far as showing who is running things for the time being.

Logan Paul’s return to the ring will likely take place at SummerSlam, and according to him, he’s coming for The Miz.