Our recent post about the day the WWF purchased WCW drummed up a lot of conversation about the timeline of events around that time in 2001, which brings us to the next big occurrence at the time which was the infamous final Nitro that aired live on TNT. Going into the show, we literally had no idea of what to expect. By the end of the show, it felt like WCW would have a renewed presence and Nitro would be back in no time.

It was days earlier that we got the shocking news that the WWF had bought WCW, but no one had any idea what that actually meant. Would Vince McMahon just close WCW and use the video library for financial gain? Would he just bring the WCW wrestlers over to join the WWF roster? Or would WCW simply continue on as a separate promotion on another channel? Judging by the events of March 26, 2001, the latter seemed to be where things were going.

The image of Vince McMahon kicking off Nitro set the tone for the night – Vince was boasting about closing WCW, winning the Monday Night War, and would spend the night taking shots at guys that had a history with his company that he definitely wouldn’t be keeping. The crowd in Panama City Fl. was still excited to see WCW and Panama City always provided a unique outdoor setting for Nitro.

The first match on the show was a major one as Booker T defeated Scott Steiner to win the WCW Heavyweight and United States Championship from Scott Steiner. It was apparent that everyone involved knew Booker had to be a major player in whatever the company would be going forward. The final match of the night was a nod to WCW as a company and Monday Nitro itself as Sting battled Ric Flair – a match that also took place on the very first Nitro in 1995. Flair has told the story about not knowing he’d be wrestling until the day of, which is why he wrestled in a t-shirt for the only time in his career that we’re aware of.


While Sting vs. Flair felt like the end of a chapter or maybe even an entire book, the segment that ended the night felt like the beginning of WCW’s future. Vince McMahon finally appeared in the ring on RAW, for the first and only time ever RAW and Nitro were simulcast as McMahon was seen on USA and TNT. As Vince continued to talk about closing WCW forever, Shane McMahon shockingly appeared live at Nitro and the McMahons were face to face via satellite. 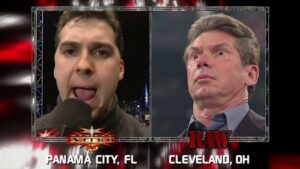 As we all know, it was revealed that the “McMahon” that signed to buy WCW was in fact Shane McMahon, and it felt like Shane would be the face of the new WCW. That night, Shane represented something new and exciting, a show that had an interest no matter what network it aired on. Instead, WWF brought WCW onto their own programming, making them immediate heels no matter what they did, and ultimately the entire story became such a mess that it had to be scrapped within a year.

If only WCW could have downsized for a bit, run familiar WCW towns, and rebuilt it into a contender again. Even giving it a one-hour show on any network just to keep it a separate entity would have given it a chance to survive. As we now know, Goldberg, Eric Bischoff, the nWo, Rey Mysterio, and more were available within about a year’s time, which would have given WCW the star power needed to start some crossover opportunities at that point.

WCW Monday Nitro made undoubtedly made its mark in history. It took on the already-established Monday Night RAW and was defeating it decisively within just a couple of years. Sadly, TV network executives that weren’t fans of wrestling ultimately decided WCW’s fate by removing the show from the air and ending the promotion that had the WWF on the brink of bankruptcy just 3 years prior. Monday nights would never be the same again.