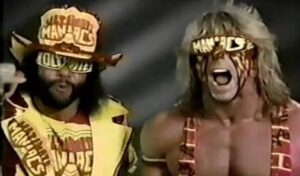 In recent years The Ultimate Warrior is usually a little “out there” (yes even for The Ultimate Warrior) any time he has made a statement or appeared publicly.  That is not the case today, as The Warrior has released the most genuine videos we have seen from him as he remembers one of his greatest rivals, “Macho Man” Randy Savage.

Of course, everyone will always remember the legendary career match at WrestleMania 7 between The Warrior and Savage, but there were many years spent in WWE together.  It is not often that we hear The Ultimate Warrior be so genuine and give such praise to any other wrestlers, but in these videos, he joins the world in sharing his Macho Man memories. This was pretty awesome for the Warrior to sit down and do, and goes to show just how much Macho Man meant to the wrestling world as a whole.  Here are parts 1 and 2 of The Ultimate Warrior sharing his memories and thoughts on Randy Savage: