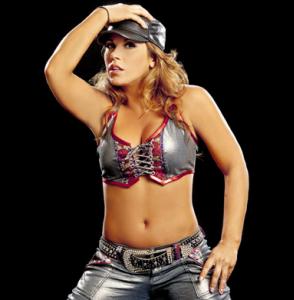 Mickie James has had a really rough time lately in WWE; for a few months we’ve read rumors that WWE management has been down on Mickie James’ weight; now you may be thinking “WTF?”…and many people are thinking the same thing…but apparently, we’re not talking about normal person weight, we’re talking about WWE Diva strict body and weight standards here and apparently by those standards, Mickie James is fat.

This past Friday, a lot of people did not like the fact that Mickie’s weight issue was brought into a storyline as Michelle McCool and Layla made a video about Mickie being a pig, even going as far as calling her “Piggy James” which was followed by Mickie shedding tears in the ring after seeing the video. Well, Mickie has actually had bad luck for the past couple of years really.

If you recall last year, PWR posted about Mickie James being called out on the radio about the nude pics from her past. Well, now we’ve uncovered that there are even more Mickie James nude pics out there. Our original post noted that Mickie posed for Legshow magazine under her former wrestling name “Alexis Laree,” but these newly uncovered pics are from a site called NaughtyMag.com and just like the first set, these pics are extremely NSFW.  So while Mickie is currently the hot topic for being fat by WWE standards, she will also have to deal with the fact that she chose to do nude pics for porn sites and magazines prior to WWE and more and more of those nude pics are being uncovered and will continue to haunt her.