These are the top wrestling stories on social media in the past 24 hours. As always, Pro Wrestling Roundup brings you the latest WWE news and pro wrestling rumors every day.

1. John Cena gets a lot of hate from certain fans, but did you know that he has granted over 500 wishes through the Make-A-Wish  Foundation? Even if you aren’t a big fan of Cena, you’ll be moved by this video of him meeting a young fan who uses wrestling as motivation. Via Andrew Gould of Bleacher Report. Read some more background from his article here.


2. WWE star Triple H recently spoke with ESPN and WrestleZone.com has the highlights here. You’ll want to read this if you are wondering what the WWE trainers thought of Enzo Amore. Also, Triple H talks about the difficulty of wrestling after a long layoff and trying to be a part-timer.
3. Matt And Jeff Hardy Reincarnate The TNA Tag Team Titles, Threaten To Delete Impact Wrestling
We posted about some of the changes at TNA, including the Hardys leaving TNA, back on March 1. Well, that was hardly the end of that story. Matt and Jeff Hardy have been battling with Impact Wrestling over the rights to the “Broken Universe.” Also, the Hardys managed to take the TNA World Tag Team Title belts with them. If you want to find out the fate of the belts, you will want to read this article at Still Real To Us. 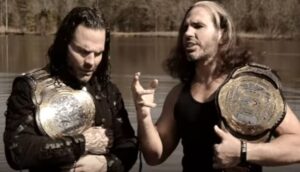