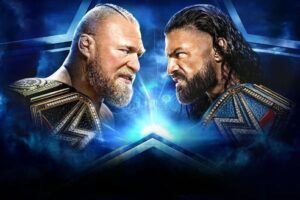 Following the amazing night 1 of WrestleMania 38, we have an entire second half to go so we’re taking a look at tonight’s card.

I admittedly stated here on the site that Night 1 of WrestleMania 38 is where the majority of my interest was due to the Cody Rhodes and Steve Austin returns, but that’s not to say WWE doesn’t have a lot more up their sleeve for night 1. Brock Lesnar vs. Roman Reigns has been building for the majority of the year, and unifying both titles is a major thing for the entire company.

Outside of the main event, the card has a lot of potential even though some of it seems a bit thrown together. I even feel this way about the Edge/AJ Styles match, since the story was Edge challenging anyone to have an epic WrestleMania match, AJ Styles accepts, and Edge randomly turns and is now a bad guy after just being the super good guy that teamed with his wife Beth Phoenix at the Royal Rumble. Will it be a great match? Most likely, but the build and story just hasn’t hooked me.

Filling out the card we have non-wrestlers Pat McAfee and Johnny Knoxville in action, the RAW Tag Team Title match, the last-minute Omos vs. Bobby Lashley match that was just announced last week, and then the tag team match from last night that was cut and moved to tonight with The New Day taking on Sheamus and Ridge Holland.

What memorable moments will come out of tonight? Will there be more surprises to report? Take it all in during WrestleMania 38 night 2 which begins shortly!