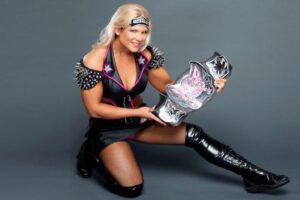 WWE continues their weekly announcements for the 2017 Hall of Fame class, and former Women’s and Divas Champion Beth Phoenix is getting the call this year.

I’m sure I’m not alone in feeling like this induction feels a bit rushed, as it feels like Beth Phoenix just retired from in-ring action, and wasn’t in WWE all that long. Phoenix was a great talent, but she seemed to come along in a period when the women (or “Divas” at the time) weren’t exactly given much spotlight and didn’t get a lot of time on TV; Beth was a standout talent at the time and there were hopes that she would get some better talent to work with at the time.

Beth Phoenix did create a moment that will live on in WWE history when she became one of only three women to enter the Royal Rumble, where she actually eliminated The Great Khali. The “Glamazon” showed her depth as a performer as she was part of the comedic duo “Glamarella” with Santino Marella as well.

Since retiring from WWE in 2012, Beth Phoenix has remained in wrestling-related headlines being she has since had two children with and recently married WWE Hall of Famer Adam “Edge” Copeland.

So is Beth Phoenix deserving of the WWE Hall of Fame at this point? It does seem early given the fact that the likes of Ivory, Victoria, Jazz, Molly Holly, Mickie James, Chyna, and even Sable have yet to receive the call. If WWE is moving this fast, The Bella Twins, AJ Lee, and others from more recent times will already have a chance at getting the Hall of Fame call.

We hope WWE doesn’t continue jumping the gun because there are still a number of talents that have yet to be inducted but are way overdue.