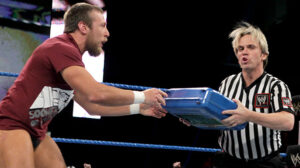 The biggest news coming out of the TLC pay-per-view is the World Heavyweight Championship win by Daniel Bryan.  Bryan of course was not scheduled in a match on the PPV but rather cashed in his Money in the Bank briefcase after Big Show defeated Mark Henry for the title.  Just after winning, Big Show was attacked by Henry and laid out, prompting Bryan to hit the ring and cash in.

So Daniel Bryan is now officially the World Heavyweight Champion.  I use officially because just a few weeks ago WWE tested the waters by having Bryan “win” the title by cashing in on Mark Henry, only to have Teddy Long reverse it due to Henry not being cleared to wrestle. Well, this time around word is that Henry is legitimately injured and the decision was made to do the title change tonight at TLC.

Now the question is, how long will Daniel Bryan hold the belt.  My prediction….not very long.  I think Bryan could be pushed as a legit champion that even though small, has an arsenal of submissions that can defeat anyone at any time.  But my gut feeling is that WWE won’t run with a smaller guy as champion for very long, and I could see him dropping the belt to Big Show or even Henry soon.

Other results from TLC: