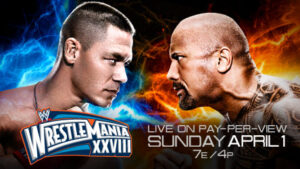 It’s hard to believe that the hype for WrestleMania 28 began one year ago, and now we are only 1 week from the mega event.  I really think for the first time since The Rock vs. Hulk Hogan at WrestleMania 18, this year has that one match that brings out the WrestleMania magic, that of course being The Rock vs. John Cena.  This isn’t a match we’ve seen on RAW before with a new spin on it, it didn’t happen years ago or anything, but the talk about it has gone on for years.  I think next Sunday will be truly something special because of that match, and I do not see a way that it isn’t THE main event on the show.

The Rock vs. John Cena

This will be magic, plain and simple.  If for nothing else, the staredown between the 2 in front of a rabid Miami crowd will be a “Mania moment” In itself.  The other factor that really makes this match one of those special magical Mania matches, is that it is COMPLETELY unpredictable.  I don’t see how Cena could win clean in front of that Miami crowd without a flat feeling to end the show.  The ONLY way I see Cena winning and it being OK, is if Cena finally did the heel turn and opens up a whole new chapter in his career, but I don’t think it will happen.  The Rock winning seems more likely, especially since there is already talk of him sticking around for more matches.  Prediction: The Rock

Triple H vs. The Undertaker – Hell in a Cell – Special Referee: Shawn Michaels

WWE has put a lot of effort into making this third WrestleMania encounter between Triple H and The Undertaker something special.  Yes, it’s the third time these two have had a match at WrestleMania, the first was at WrestleMania 17, then of course last year at 27, both of which The Undertaker won.  This time they’re adding both Hell in a Cell and Shawn Michaels refereeing as factors for a possible Triple H win.  They’ve highlighted the fact that Triple H beat the hell out of The Undertaker so bad that he was out for a year, and may have some believe the streak may come to an end.  I’m seeing HBK being involved in the finish here, probably causing Triple H to lose somehow.  Triple H isn’t a full-time wrestler anymore, so him ending the streak just doesn’t seem to be a viable option.  Prediction: The Undertaker goes 20-0

This match has the chance to be the show-stealer wrestling-wise.  They’ve added a little fire to the match in recent weeks with Jericho calling out Punk’s family’s drug/alcohol problems.  The story itself is OK, it’s got a little fire, but the actual match will be what stands out here.  I don’t see a reason just yet for Jericho to take the title, maybe if the feud continues after Mania.  Prediction: CM Punk

Over 3 months ago when Daniel Bryan won the World Heavyweight Championship, I predicted that he would only hold it for a few DAYS at best.  I’ve been wrong on this one, as Bryan has had a successful reign as champion and even parlayed it into a heel turn that is now a great character.  His latest angle with “girlfriend” AJ has some Macho Man/Elizabeth qualities to it, and I think it would be great if they kept the title on him at Mania and kept it going.  Deep down, I think WWE is big on Sheamus and he will walk out of Mania as champion.  Prediction: Sheamus

It seemed for months that Big Show vs. Shaq was all set for Mania, but for whatever reason, it’s not happening and instead, we get Cody Rhodes vs. Show in a match based on Cody bringing up Big Show’s less than stellar record at Mania.  I’m hoping Cody takes this one, because Big Show winning does nothing for me, and Cody is a rising star that has developed into a really good heel. Prediction: Cody Rhodes

This is basically the yearly “Let’s get as many guys as we can who aren’t in a match in a match” situation.  The teams as of now are Team Long: Santino Marella, R-Truth, Zack Ryder, Kofi Kingston, The Great Khali, and 1 more TBA vs. Team Laurinaitis: Mark Henry, Dolph Ziggler, Christian, Jack Swagger, and one more TBA.  It seems that Team Long is filled with underdogs while Team Laurinaitis has more power players.  The Miz may be the X factor here, and if it turns out that Team Laurinaitis turns him down and he joins Team Long, a big Miz face run could be imminent.  If that scenario doesn’t play out, I think team Laurinaitis will take it as the uncertainty of “Big Johnny” running both shows is interesting to say the least:  Prediction: Team Laurinaitis

This match definitely feels thrown together.  2 main event guys that had nothing else to do, so throw them in a quick angle together.  I”m not totally sure I understand the issue here, as Kane brought up something that happened 6 months ago on Smackdown and is still pissed at Orton for it.  I think Kane SHOULD win this match just to keep some of his fire (no pun intended.)  Kane feuded with Cena, lost that feud clean, and needs a win back to remain in a top spot and continue this feud. Prediction: Kane

Kelly Kelly and Maria Menounos vs. Beth Phoenix and Eve

WWE didn’t have much going on with the Divas except for Eve’s heel turn which has been great….none of the face Divas really have enough heat with Eve right now for a match, so WWE is bringing back Extra host Maria Menounos.  I don’t see a problem with it, as she appears to enjoy taking part in a WWE match here and there, and she’s hot so she fits what WWE wants.  Best case scenario, Kharma returns and smashes everyone……but I think this will be a win and celebration for Kelly and Maria Menounos so it can be featured on Extra etc.  Prediction: Kelly Kelly and Maria Menounos.

Well, there you have it, the complete WrestleMania 28 card as of now, along with my predictions.  I actually hope some of my predictions are wrong and some swerves are thrown our way.  8 matches announced and 4 hours to fill, although WWE will have extras thrown in like the Hall of Famers coming out etc.  I think the past few WrestleManias have been good, but nothing special that hadn’t been seen before.  The past few were just based on the name WrestleMania and the big-time feel it produces regardless.  This time, there is that 1 match that will have the once-in-a-lifetime feel.  John Cena vs. The Rock is going to be a happening and something that very rarely comes along, in my opinion, it feels like this generation’s Hulk Hogan vs. The Ultimate Warrior.

What are your predictions for WrestleMania 28?