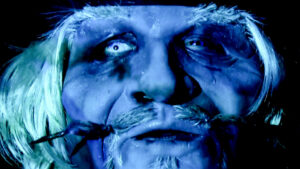 Bray Wyatt’s return to WWE had one of the most unique buildups ever seen in pro wrestling. Now, the build for his initial return storyline has been just as unique. Those that prefer “just wrestling” without anything over the top won’t be fans of this, but anyone looking for cinema-like entertainment has to at least be intrigued.

Following Bray Wyatt’s memorable Extreme Rules return, the first question was “who will he feud with?” While Bray obviously stepped right back into a main event spot, it seems that his entire return will be made into a complete standalone storyline that will include its own characters.

As seen the past two weeks on SmackDown, Bray Wyatt spoke about being himself and how thankful he is for the fans. During those promos, Wyatt has been mysteriously interrupted by cryptic videos. This week we got a full view of Bray’s “Uncle Howdy” who basically called him out for being a liar.

Leading up to Wyatt’s return, there were rumors of a “Wyatt 6” group that might consist of some of the puppets seen during the “Firefly Funhouse” era. Speculation has run wild as to who those characters may turn out to be, but judging by what we’re seeing now, there may end up being completely new characters coming from all this.

So who is Uncle Howdy? That’s the question that has the Internet burning up with guesses. Obviously, the person is in a mask and it’s quite likely that it’s Wyatt himself portraying one of his multiple personalities that may end up feuding with themselves somehow. Another rumor has been that Wyatt’s brother Bo Dallas is returning to the company and is portraying Howdy, which would explain the similarity in voice. Finally, many have pointed out that Bray’s real-life uncle Barry Windham is at least who the character is based on judging by the look of the mask – could Barry himself appear as the elder of the Wyatt Family?

If you think all of this is very Hollywood, you’d be right. It was revealed recently that WWE hired Rob Fee who is a highly accomplished horror writer to work for the company, and he has been a major part of Bray Wyatt’s “White Rabbit” campaign. Combine this with the fact that Wyatt has had professional masks made by the likes of Tom Savini for The Fiend and now obviously Uncle Howdy, we’ve pretty much got a Hollywood production on our hands.

If you like weekly stories to follow with your wrestling, even if they’re over the top and involve characters that are definitely “outside the box,” this Bray Wyatt story is right up your alley. As Triple H stated in his recent interview, Bray Wyatt is one of the most creative people he’s ever worked with, and it seems like now he’ll be able to put that on display more than ever before.