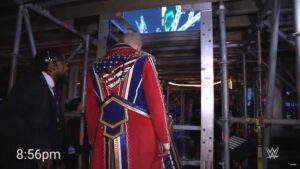 Cody Rhodes’ official return to WWE was undoubtedly a moment that will be remembered for years. Leading up to the big moment, things were kept so well under wraps that no one knew for SURE that it would be Cody who faced Seth Rollins at the big show. In true WWE surprise fashion, WWE kept Cody hidden away until “go time” and we were already in hopes he was being followed by camera crews.

It didn’t take long as WWE has already released footage of Cody hiding in a bus during the day, and being escorted right to the stage for his match. From being interviewed on his bus alongside his wife Brandi and their daughter and being ushered by Bruce Prichard to the main WrestleMania stage and being prepped for the moment he returned, this video captures a lot of the magic from last night.

As a bonus, WWE has included footage of Cody speaking about the match after it was over and how it all felt. Interestingly enough, Cody for the second time has referenced that he’s “here to play the game.” What does it all mean? We can’t say, but Cody Rhodes definitely has our interest at least for this initial part of his WWE return.