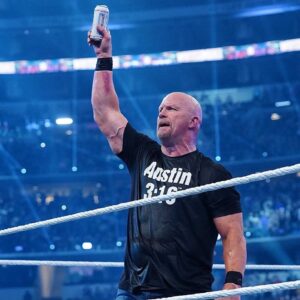 The first night of WrestleMania 38 was memorable to the point that it will be a tough act to follow on night two. Earlier today we questioned if such would be the case, simply because of the chance to see the return of Cody Rhodes, and Steve Austin wrestling again, both of which took place.

If you missed the night, it’s definitely worth going back and watching on Peacock. I’ll give a quick rundown of the results below:

The Usos defeated Nakamura and Boogs – Toward the end of the match, Boogs suffered a torn quad and will be out of action as surgery is needed.

Drew McIntyre defeated Happy Corbin – after the match, McIntyre swung his sword at Madcap Moss, hit the ring ropes, and sliced through them. We’re hoping Drew doesn’t adopt a He-Man gimmick following this.

The Miz and Logan Paul defeated The Mysterios – Logan Paul looked outstanding, he could definitely be a big star in wrestling if he chose to. The real surprise here was Miz turning on Paul after the match, which could be a way for Paul to wrestle Miz next. Paul is a natural heel but against The Miz he’d likely be forced to be a face.

Bianca Belair defeated Becky Lynch for the RAW Women’s Championship – Great hard-hitting match here, Bianca shines at WrestleMania once again. Bianca and Becky are both in the group of WWE ladies that can deliver these highly memorable main event matches.

Cody Rhodes defeated Seth Rollins – The rumors were true, Cody Rhodes is back, and his return created a WrestleMania moment in itself. Hearing Cody’s AEW music and seeing him use the same “American Nightmare” character in WWE just feels like a really big deal. Cody getting this big initial win put him back on the WWE map, now we hope they have ideas in mind to keep riding the wave of popularity that was created tonight.

Charlotte Flair defeated Ronda Rousey to retain the SmackDown Women’s Championship – another good albeit different than the earlier Women’s Title match. At this point, Ronda losing is OK (especially to Charlotte) and she had a couple of moments that nearly saw her pull off a victory.

“Stone Cold” Steve Austin defeated Kevin Owens in a No Holds Barred Match – The KO Show ended WrestleMania Saturday, and as expected, things became much more than an interview. Owens revealed he’d tricked Austin into being on the show, but he was actually looking for a fight. Owens challenged Austin to a No Holds Barred match, and the crowd was next level in support of “The Texas Rattlesnake” accepting the challenge.

For the first time in 19 years, Steve Austin had an official match, in what he called his last. This was a wild brawl that went all over the arena as Austin drank beers throughout. While Austin was in good shape, he didn’t go with the tights and stuck with the classic Austin 3:16 and jean shorts look.

Austin delivered one last stunner to win the match, close WrestleMania, and maybe end his career once and for all. It’s hard to believe there is still an entire second night to go, but WWE will have to pull out all the stops to compete with what we saw tonight.