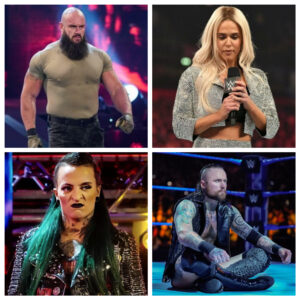 Braun Strowman is probably the first name that jumps off the page here as he just competed at WrestleMania Backlash and has remained at the upper part of the card for the past few years, even winning the Universal Championship by defeating Goldberg at WrestleMania 36 (albeit he was a replacement for Roman Reigns.) WWE releasing a monster like Strowman who has been in the title picture for years is quite a surprise since AEW is steadily signing names and even has a new show coming soon that could use the boost. Braun is a recognizable main event star that seems like a no-brainer as far as jumping ship.

Lana is another bit of a surprise, maybe because she too has been with the company for years, or maybe because she just appeared on RAW this past Monday. Lana of course debuted in WWE alongside her husband Rusev (now Miro in AEW) and was involved in some memorable moments with that character. In the past couple of years, Lana has dropped the Russian accent and has most recently been involved in a tag team with Naomi, but apparently, her time is up in WWE – AEW seems like a natural move for her to once again join Miro and maybe even compete in their women’s division.

Aleister Black is yet another surprise due to, if nothing else, he just returned to WWE TV after weeks of vignettes that build his repackaged character. Truth be told, Black just hasn’t been the same since the cool presentation he had in NXT. Like many others, after moving up to the main roster, he just got lost in the mix. Interesting to note that rumors were circulating in recent weeks that Black’s wife Zelina Vega (Thea Trinidad) was returning to the company following her release last year, and her joining Black on TV seemed like a natural fit, but this release obviously puts an end to that idea. It should be interesting to see what Vega’s status will be following Black’s release.

Rounding out the current list is Murphy, Santana Garrett, and Ruby Riott. Garrett is probably the one name some may not have been aware of what her status was with the company, but apparently, she was set to debut on TV recently but never made it. Riott had a storyline last year that saw her reunite with former Riott Squad member Liv Morgan, and the two had been working as a team on recent TV. Murphy had quite a storyline going with the Mysterio family that was dropped and it looked like he would be aligned with Seth Rollins once again, but WWE’s creative is pretty much all over the place so it’s hard to tell where much of anything was going.

Of course, the first thought is which of these talents will be picked up by AEW and how great can they all be without WWE’s creative restrictions on them? Assuming they all have 90-day no-compete clauses, we could see some fresh faces on Dynamite and other AEW programming this fall!