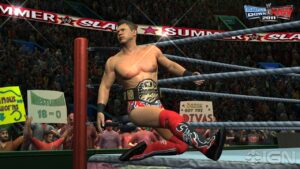 Over the years on this site, we really haven’t covered much when it comes to wrestling games.  Personally, the reason for this is that I played wrestling games from the glory period in the last 90s.  WCW vs. nWo World Tour, WCW Revenge, WrestleMania 2000, No Mercy, Fire Pro Wrestling, the list goes on and on.  For some strange reason, while these games set a standard for pure wrestling game fun, just about all of the games that followed over the years got worse instead of better.

For some reason, it just seems like companies couldn’t follow the example set by the great games, and instead just made up their own games that had unrealistic wrestling, horrible controls, outdated rosters, and no customization.  Even though the Smackdown series of games (Which has evolved into the Smackdown vs. RAW series) seemed to fail in some way every year to me, this year’s game seems to be a very well-done offering.

Most of the time in Smackdown vs. RAW games, we get a few new features, an updated roster, but overall the same feeling type of game.  You play through a career mode, unlock a few new wrestlers and arenas, and you are pretty much done for the year.  But in 2011 they have packed the game with so many unlockables it is a serious task to get through it all.  Not only is there a story mode where you can choose five different stories to play through, all of which are unique with surprises and twists abound, but now there is “WWE Universe Mode” which is a real-time WWE of your own that lets you play through your own WWE calendar of TV shows and every Pay Per View.

After playing through the stories and enjoying that aspect, I found it odd that I really didn’t unlock much.  After some research, it turns out that  I missed a LOT in story mode, and on top of that the WWE Universe Mode has a ton more unlockables to achieve.  The Universe mode is really what will keep me playing for the long haul since it is endless and you can basically run WWE how you see fit.

If that’s not enough, a downloadable content pack was just released that features Nexus members Wade Barret, Justin Gabriel, and David Otunga among others.  Players can customize who is aligned with who and who is feuding, a nice addition that old schoolers will remember from the No Mercy days on N64.  While you can’t totally edit current superstars, they’ve at least allowed us to edit colors to mix things up a bit.

It would take tons of paragraphs to cover it all, but I am enjoying this game more than any other in the franchise, and would recommend this to anyone who enjoys customizing a ton of aspects in the game, and enjoys a huge roster that features just about anyone you can think of in WWE, and some legends mixed in to boot.