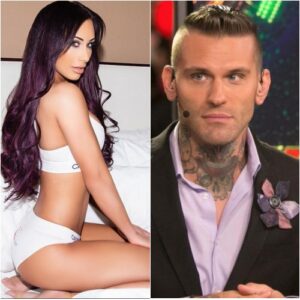 We knew there had to be a reason that both Corey Graves and Carmella were trending on a random Saturday afternoon and we were definitely right.

Earlier today Corey Graves’ wife Amy Polinsky took to Instagram to reveal that she had discovered her husband was “sleeping with” fellow WWE star Carmella. Polinsky revealed in the since-deleted post that she put 11 years of support into Graves’ attempt to accomplish his dreams only to be “punched in the gut.” She also mentioned how she stuck by his side through suicide attempts and alcoholism, only to find out he’s been sleeping with one of their daughters’ role models. In the end, she did say she hoped Graves and Carmella were “happy together” – and we’re sure you can all imagine how heartfelt that was.

The saga continued on with Graves’ wife posting screenshots of their conversations, some hinting at Graves’ suicidal thoughts, while others saw Graves plainly ask her to take down her posts because “WWE would sue.” There’s been no denial from any party involved thus far, but it will be interesting to see if Graves’ involvement in Elimination Chamber or RAW and especially SmackDown Live changes this week.

Corey Graves has become the top commentator in WWE as he works both RAW and SmackDown Live, but is also known for his outspoken nature especially on social media. Grave regularly takes on controversial topics and isn’t afraid to call people out or shut down fans. Now? If these allegations are true, it’s going to be very hard for Graves to say anything about anyone. The term “Mella is Money” should get quite the reaction should Graves still choose to use it on commentary from here on out!

This story is obviously still developing, but it should be interesting to see if Graves or even Carmella put out any official statements on the matter…