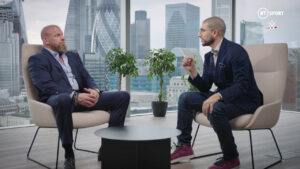 Triple H has probably been THE most talked about person in pro wrestling in 2022. After taking over as WWE’s head of creative, the changes have been plentiful on just about every broadcast. Today, we finally get to hear from the man himself as Triple H sat down for over an hour with BT Sport’s Ariel Helwani.

Ahead of Triple H’s first premium live event after taking the reigns with Clash at the Castle this weekend, he took the time to share so much about how he is now making the creative decisions for WWE, a much more detailed account of his health issues that had him completely out of WWE for months, and his thoughts on bringing back former talent.

One of the most interesting topics was Triple H discussing AEW and how he views them, as well as how much of their product he keeps up with. Triple H also reveals how his taking over came to be, and his interactions with Vince McMahon as the proverbial torch was passed. Triple H also answered (well, as much as he could) the burning questions about talents like Sasha Banks, Bruan Strowman, and Bray Wyatt who many fans feel could be back in WWE at some point.

This sort of transparency and willingness to share details on everything from what’s going on behind the scenes to his own near-death health struggles is just another chapter in Triple H’s WWE and another significant change from the previous regime.

Check out Triple H’s hour plus interview with Ariel Helwani below: