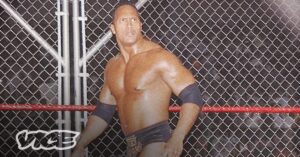 If you were a fan of Vice’s “Darkside of the Ring” series, a bit of an extension of sorts has been announced as “Tales from the Territories” has officially been announced. It was unfortunate to hear that Darkside of the Ring would not see another season, but The Rock has stepped in and his “Seven Bucks Productions” company has joined the creators of “Darkside” to create this new series.

“Tales from the Territories” looks like it will be a great series, especially for old-school wrestling fans. Many of us love to hear a great story from the territory days but to see and hear legends who lived it like Jerry Jarrett, Bret Hart, Jerry Lawler, Jimmy Hart, and even Abdullah the Butcher tell their stories in a roundtable situation will be highly unique.

Why would The Rock have so much interest in this series you may ask? Likely because he lived the territory life with his dad Rocky Johnson along with a huge part of his family. As depicted on “Young Rock” on NBC, The Rock literally grew up in the pro wrestling business, so being able to now put money into projects like Tales from the Territories has to be a bit of a dream come true for him.

“Tales from the Territories” kicks off on VICE in October, check out the awesome trailer below: