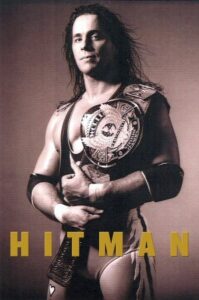 We were fortunate enough to receive an advance copy of Bret Hart’s autobiography “Hitman – My Real Life in the Cartoon World of Wrestling.” This was a book I had heard months ago was already being said to be at the top of the list of best wrestling books ever, and after reading it, I can’t argue.

The first thing that comes to mind about this book, is it is more complete than any other I’ve read. Many times, you read a wrestling book, finish it, then have the feeling that it just didn’t cover everything. Well, Bret Hart’s book comes in at a big 549 pages and reads like a diary that documents Bret Harts’s entire career, and everything is covered.

Bret carried a voice recorder throughout his career and documented everything, which is why this book feels so complete and doesn’t leave out any time periods or events. Going into this book, knowing that Bret Hart has been very opinionated on various subjects over the years, I expected to read Bret being negatively biased towards certain individuals or organizations, but was pleasantly surprised that Bret gives a very honest and straightforward view on everyone in the business, even Shawn Michaels and Vince McMahon. The book holds nothing back, openly describing the drug and alcohol abuse that was rampant in the business, which in many cases are eye-opening things to read yet still very honest portrayals of what was going on at the time. Also, this book is a real look at what being in the wrestling business is all about. Many wrestlers breaking in the business and working 2-3 shows a week tops, at the same local shows, get a look at what it means to really travel the world, working nonstop, and understanding what it takes to really make it in the business along with the toll it takes professionally and personally.

Also, many other wrestling books dedicate a good portion of the book to the author’s early life growing up, and advances into how they got into the wrestling business; this book does the same, except the wrestling part begins right away as Bret was born into the business of course with his father Stu Hart running Stampede Wrestling in Canada, so even the earlier parts of the book gives an awesome view of wrestling in the ’50s and ’60s, then on through Bret’s career of course. Along the way you get a broad look into so many different era’s of wrestling which makes the book even more enjoyable, with plenty of stories about Bret’s closest allies like Jim Neidhart, Dynamite Kid, Davey Boy Smith, and Brian Pillman, to Bret’s greatest rivals such as Steve Austin, the Undertaker, and Shawn Michaels.

Of course, probably the most historical event of Bret Hart’s career, the “Montreal Screwjob,” is covered in-depth, along with the aftermath and Bret’s consequent move to WCW. The other major event of course was the death of Bret’s brother, Owen Hart, and these events are covered in-depth as well, along with many never told stories about the aftermath with many of the other Hart family members.

The only part I’d like to hear more about was Bret’s more recent life, including his Hall of Fame induction and work on his DVD that was released by WWE. These are only small gripes overall and are only a result of this book being so good, I just wanted to read more and more. If you are a Bret Hart fan, there couldn’t be a better book. If you’re not a Bret Hart fan, the book is still a must-read, as the direct and honest approach and the tails told of what was going on in the wrestling business and who was doing and saying what is worth the read as well. Many feel that Mick Foley’s first book is the best of all time, it may be for some people, but Bret Hart’s book spans a larger time in the business, and will definitely rank on top of the list of best wrestling books written to date.