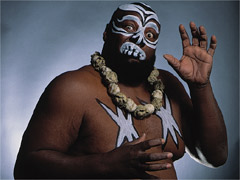 Pro wrestling legend “The Ugandan Giant” Kamala (James Harris) has undergone a career-ending surgery to amputate part of his leg due to complications from diabetes. Kamala has made cameo appearances for TNA and WWE in recent years and was still active on the indy scene.  Sadly at age 61, Kamala will have no choice but to retire after a very successful career.

Kamala began wrestling in the late 70s under the moniker “Sugar Bear Harris” before taking on the Kamala persona that was created by Jerry “The King” Lawler.  From then on Kamala was seen in every promotion around the country, doing battle with everyone from Hulk Hogan and Andre the Giant to the Von Erichs and Bruiser Brody.  Kamala was one of the wrestlers that made you know you were watching something that you couldn’t see anywhere else but wrestling and made you want to see all the craziness live.

I remember first seeing Kamala in a cage match with Andre the Giant.  The idea of a giant savage beast battling Andre in a bloody cage match was a thought that would make any fan want to buy a ticket to see it.  Kamala was an attraction and a unique character the likes of which we don’t see hardly at all in today’s wrestling.

Kamala posted this video from the hospital to let everyone know that he is in good spirits and still feels blessed: