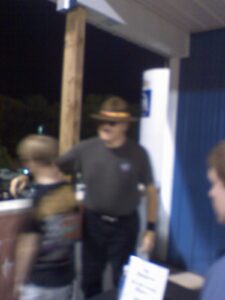 A friend ran into this wrestler at a Single A ( SAL) Minor League baseball game tonight.

The picture quality is pretty bad, but let me know if you can tell who this is.

I seem to think he was pretty big back around the time that wrestling was worth watching, back when the WWE was called the WWF ( and AWA and NWA were still around and televised) and before a lot of the lame shit.

Update: Of Course it was Sgt. Slaughter.