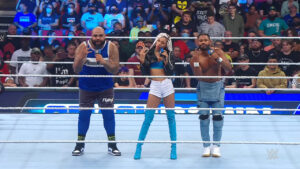 Triple H is making it a regular thing to bring back talent that he helped develop in NXT who was then ruined and/or released on Vince McMahon’s watch. Last Friday we saw Karrion Kross and Scarlett return, Monday we saw Dexter Lumis make his return to the company, and now what was once one of the fresh acts in WWE has returned as Hit Row returned on this week’s SmackDown.

Top Dolla, Ashante “Thee” Adonis, and B-Fab made their surprise appearance on SmackDown as the announcers treated it as a huge deal, and rightfully so. You may recall this past November that the Hit Row members were released just after making their much-hyped debut on SmackDown. B-Fab was the first to officially be released, and that alone was a big shock being she has an immediate presence and star power that apparently only Triple H can see. The group also featured Swerved Strickland at the time, who has since signed with AEW.

Top Dolla’s situation was also interesting, as he was hosting the WWE A&E series “Most Wanted.” Following his release, there was word that he would still host the show, but obviously, no longer be a wrestler in WWE. Now it seems that all roads are clear for Top Dolla to resume his other projects if that’s what the plan is.

It’s great to see such obvious stars who literally weren’t given a chance to do anything on the main roster finally get their due and a huge presentation. The fact that B-Fab is technically Hit Row’s manager but is able to get physical down the road opens up the door for a lot of possibilities as far as stories and matches go. Hit Row under Triple H’s creative is definitely going to be something to watch; below is video of Hit Row’s SmackDown return:

Look who’s back on #SmackDown! pic.twitter.com/w8Jw1bZ5Wx