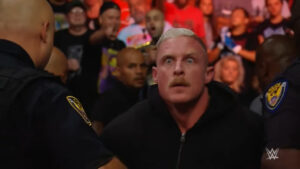 Triple H’s takeover of WWE creative could have been a prolonged process, but after seeing just a few TV shows under the new regime, maybe it won’t be as slow as anyone thought.

As reported Friday, both Karrion Kross and Scarlett Bordeaux returned to WWE on SmackDown, and tonight another released former NXT star returned to the company as Dexter Lumis made an impactful debut on the main roster.

What was great about Dexter Lumis’ appearance on RAW is that there was a show-long angle taking place, but we’re not sure if it was connected to Lumis or not – guess we’ll have to tune in next week – mission accomplished.

If you were paying close attention to the backstage interviews on RAW, you’d notice there were background things going on that weren’t really acknowledged on commentary – one scene saw a wrecked car with talent and others standing around as if the accident just happened. Another scene saw security rush by during an interview, without much else being said. To end the show, we saw AJ Styles distracted by something in the crowd; was it a fight? Were Superstars still brawling in the crowd? As the camera barely caught what was going on, we saw the cops arresting none other than Dexter Lumis.

Dexter Lumis was quite the character in NXT, coming across as a possible serial killer or maybe just a psychopath, but the creativity was flowing whether Lumis was involved in a crazy gimmick match or his wedding with Indi Hartwell. To go from being so involved to just being released once Triple H was gone due to his health issues, it just didn’t seem right. Now, “The Game” is once again righting the wrongs.

Was Dexter Lumis out to just terrorize the entire company? Was he going after AJ Styles and if so, why? And was it even Lumis behind the car wreck in the back? These are the questions that all wrestling shows should shoot for, continuous stories that we want to see unfold. Now, another fresh face in Dexter Lumis has been thrust onto the scene and Triple H hit another homerun when it comes to making WWE interesting again.

Here is the full video of Dexter Lumis’ return to WWE on RAW: