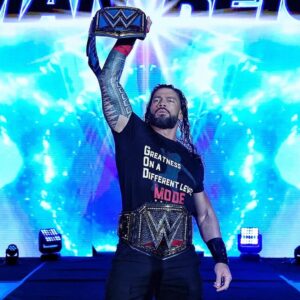 There’s been a lot of buzz over the past few weeks since Roman Reigns has made it somewhat of a tradition to end WWE house shows he’s on with out-of-character speeches. During some of these speeches, “The Tribal Chief” has dropped hints about appearing for the last time in a given town, and now we have further info. on why.

Last night at the “Sunday Stunner” live event in Cedar Rapids, Iowa, Roman Reigns wrestled Drew McIntyre and then grabbed the mic for another talk with the fans. Reigns confirmed that last night’s house show could be his last live event, and word is that Reigns has signed a new contract that will see him working fewer dates for WWE.

While Reigns is of course booked to compete at the major stadium shows over the summer and definitely worked into the WrestleMania 39 main event plans, Roman may become one of the main event stars that you only see on major shows and TV. This has to be considered a major blow to WWE’s house show business as Reigns has become the top star (and champion of both brands) in the past year without question.

Beyond the situation now, Roman Reigns moving on to more Hollywood work is definitely on the table, so he may be the next star to take the path of his cousin The Rock as well as more recently John Cena who have both become full-time Hollywood stars. It’s safe to say we may likely be seeing Roman Reigns’ last full-time run over the next couple of years.

Roman Reigns’ speech with the Cedar Rapids crowd can be seen below: