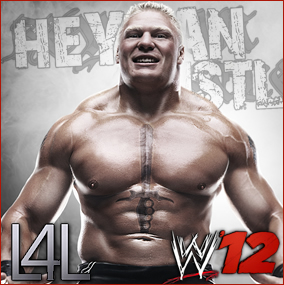 A couple of months ago we revealed the roster for the “WWE 12” video game, and it was awesome to see that THQ stacked the roster this year with legends like The Legion of Doom, Demolition, Vader, Arn Anderson, and many more. With The Rock on the cover of the game and playing a huge role in the push for the game, it’s been apparent that THQ is going all out to make WWE 12 the biggest WWE game in years.

With all the hype and stacked roster, there has also been rumor of a “mystery superstar” that would make a huge impact on the game. Now today we can confirm that Brock Lesnar will be featured in the WWE 12 game. The story of Brock being featured in the game leaked over the past few days, with UFC owner Dana White even voicing his approval of Brock being in the game. Brock was on the cover of the classic “Smackdown: Here Comes the Pain” video game that was regarded as one of the best in the series, and this is Brock’s first appearance in a WWE game in years. There is even a Brock Lesnar trailer for WWE 12 to announce his return, which was said to be shot in the past few days by Paul Heyman himself.

As if WWE 12 didn’t sound awesome enough, this huge announcement should put the game over the top as far as hype goes. Everyone that has watched Brock Lesnar in UFC and wondered how cool it would be to see Brock come back to WWE and kick ass will now get the chance to make it happen. Brock has his current look in the game with his chest tattoo but is sporting his classic WWE tights and gear. Be sure and pre-order WWE 12 now and lock in your copy of the game as it will be available on November 22. Here Comes the Pain indeed: