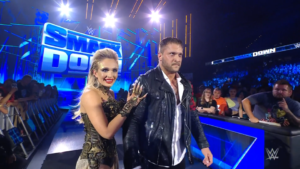 Big moves continue to be made as Triple H’s vision of WWE becomes more apparent and tonight was another one as we saw the return of Karrion Kross and the main roster debut of “The Smokeshow” Scarlett Bourdeaux on SmackDown.

You may recall Karrion Kross was NXT Champion in 2020, and alongside Scarlett, had one of the best presentations in all of WWE. Kross’s first title reign ended due to an injury, but upon his return, he regained it and made his debut on the main roster shortly after. This is where things went bad, as apparently Vince McMahon saw Kross as some sort of gladiator and changed his whole character – and also didn’t Scarlett in the main roster move. Within just a few months, both Kross and Scarlett were released from the company.

Tonight on SmackDown, Triple H righted a lot of wrongs as Kross returned with Bordeaux by his side, and was immediately presented as a main eventer as he got involved in the Roman Reigns/Drew McIntyre feud. While Drew too has suffered greatly (character-wise) since his time in NXT, seeing both him and Kross involved in something new and different is intriguing, to say the least.

Karrion Kross just wrestled this past Sunday at the Ric Flair’s Last Match event, picking up a win over Davey Boy Smith Jr., so it’s apparent that Triple H will make moves quickly when he feels the need. Regardless of how you feel about Kross in the ring, his presentation along with Scarlett’s character were top notch in NXT and will likely do much more on the main roster.

Will Kross’s involvement lead to him being added to the Reigns vs. McIntyre match at Clash at the Castle? That remains to be seen, but it has us talking and that’s exactly what’s been missing from WWE.