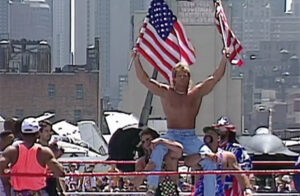 Since the patriotic vibes are in the air this weekend, wrestling fans can’t help but think back to some of the best red, white, and blue moment in pro wrestling history. One of the most memorable took place in 1993 on board the USS Intrepid, during “Yokozuna’s Bodyslam Challenge.”

The setup was a bit odd. As the story goes, WWF Champion Yokozuna wanted to have athletes from various sports attempt to body slam him, fail, and embarrass America in the process. A number of NFL and NBA stars tried and failed, as did wrestlers from the roster at the time like The Steiner Brothers, Tatanka, Bob Backlund, and even Randy Savage. All of this was obviously setting the stage for someone, but who?

Let’s rewind just a little here. Yokozuna had just won the WWF Championship a few weeks earlier at King of the Ring 93. Hulk Hogan had been beaten, carried out, and it appeared Bret Hart would be next in line after winning the KOTR tournament, at least until Jerry Lawler attacked Bret and began their feud to end the night. After all this, it was clear to many that this “Bodyslam Challenge” was the stage for the Hulkster’s return. Hulk was all about the body slams, he had a reason to seek revenge, and a SummerSlam main event rubber match almost made too much sense – but none of it was to be.

One of the funniest things about the thought of Hogan coming to save the day was that just a few years ago, WWE released the entire unedited version of the event on the WWE Network. Three to four hours of raw footage without commentary, and when suddenly a helicopter lands on the USS Intrepid, you can audibly hear the fans begin a “HOGAN!” chant. Helicopter, muscular guy in a red, white, and blue shirt? Again, it just made sense to anyone that’d been following.

But stepping out of the helicopter that day was…Lex Luger? Yes, the same Lex Luger who had only been seen in the WWF as “The Narcissist” who was a heel and loved looking at himself in mirrors, etc. Why was he here? What connection did he have? As it turned out, he just didn’t like anyone talking trash about America – who knew?

So of course, Luger hops in the ring, talks some trash about Japan because, well, just about anyone foreign was still the enemy back then, and proceeds to slam Yokozuna…saving America, or at least that’s how Vince McMahon’s commentary came across.

So at that point, if we just took a pause and looked at the situation, the WWF just catapulted Lex Luger to the top main event star with this angle, and it worked if you judge by the crowd reaction. Luger came off as a badass that might be a bit of a prick, but when you screw with America, he stepped up. He was like an edgy Rambo character that really could have taken off. The problem came was how the company handled him afterward.

Instead of running with Luger as an edgy good guy that stands up for his country, they literally turned him into Yankee Doodle. From putting him on the “Lex Express” tour bus, which we’re still not sure what he was actually campaigning for, to stars and stripes print on his Narcissist-style tights, right down to using “Stars and Stripes Forever” as his theme music – none of it worked. The all-American badass we saw on July 5th, 1993 had become a smiling baby-kissing good guy, and it was all downhill from there.

So this was a huge turning point in 1993, Lex Luger made history on this day, and it’s interesting to look back and wonder what could have been had the WWF capitalized on the momentum that was created at the Stars and Stripes Challenge: