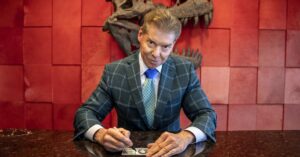 It’s been quite an interesting month for Vince McMahon ever since it was announced that he was being investigated for alleged settlement allegations. Since that time, Vince stepped back from his CEO position, but has been more visible than he has been in years, appearing on RAW, SmackDown, and even at UFC 267 last weekend.

Just as it seemed like things may blow over like they have many times before when Vince has been involved in a controversy, The Wall Street Journal is back again with a new report that McMahon paid hush money to four women, one of whom was a wrestler. The article states that a female wrestler was coerced into sexual activity with McMahon, then he demoted and declined to renew her contract in 2005. The talent and her attorney approached Mr. McMahon in 2018, and a settlement was reached for her silence. The Internet will surely be ablaze with speculation as to who the talent was.

“In another previously unreported deal, a WWE contractor presented the company with unsolicited nude photos of Mr. McMahon she reported receiving from him and alleged that he had sexually harassed her on the job, according to people familiar with the woman’s 2008 nondisclosure agreement. Mr. McMahon agreed to pay her roughly $1 million, these people said.”

With this latest round of discoveries, it remains to be seen how much more is found, and if this is enough for Vince to really be gone from the company. As we revisited last month, former referee Rita Chatterton made allegations against McMahon in the ’90s but as mentioned above, nothing much came from them in the end.

This time in the corporate WWE and with so many sponsors and networks to answer to, this may not just “go away” especially as more payoffs and NDAs from Vince McMahon’s past continue to surface.