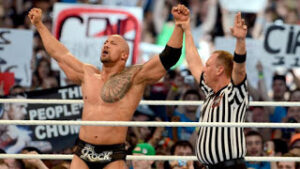 WrestleMania 28 is the talk of the wrestling world, as the show delivered some WrestleMania moments and matches that will never be forgotten.  I was shocked to see that all but 1 of my WrestleMania 28 predictions were right.  The only one I missed was Big Show defeating Cody Rhodes for the Intercontinental Title.  Here are the results from the other matches:

In the pre-show match, Primo and Epico defeated The Uso’s and Tyson Kidd/Justin Gabriel to retain the titles.

The PPV kicked off with Sheamus defeating Daniel Bryan to win the World Heavyweight Championship in 18 seconds.  This has the Internet wrestling community in an uproar due to the time of the match.  To me it seemed like this match had the least emotion going in, so throwing in a surprisingly quick win keeps things interesting and unpredictable.

Kane defeated Randy Orton –  As I stated in my predictions, Kane needed this win to remain a player in the main event scene.  The match was decent enough and ended with Kane delivering a top rope chokeslam to Orton for the win.

Big Show defeated Cody Rhodes to win the Intercontinental Title – Big Show finally got his WrestleMania moment.  I didn’t have a problem with this, but wouldn’t be surprised to see Rhodes get the belt back soon.

Kelly Kelly and Maria Menounos defeated Eve Torres and Beth Phoenix – Maria Menounos went into this one with legit cracked ribs from Dancing With the Stars, and they used that in the match as Phoenix and Eve really worked her over.  Maria did fine for not being a wrestler and ended up scoring another pin on Phoenix.

The Undertaker defeated Triple H in Hell in a Cell – This was one for the ages as expected.  Shawn Michaels was the special referee and added to the drama in the match by trying to look out for the well-being of both competitors.  Jim Ross came out and called this one, which made it even more special.  This was a brutal near 45 minutes, and in the end, The Undertaker went 20-0.  In a rare moment, The Undertaker actually assisted Shawn Michaels in helping Triple H out after the match.

Team Johnny defeated Team Teddy – This one was a pretty typical 12 man tag with each team wearing their team’s t-shirt in the match.  The finish saw Zack Ryder in the ring ready to go for the win, but Eve jumped in the ring to encourage Zack, but that opened up for a Skull Crushing Finale, winning the match for Team Johnny.  John Laurinaitis is now in control of both RAW and Smackdown.

CM Punk defeated Chris Jericho to retain the WWE Championship – This was a great match as expected.  Great back and forth action after a slow start, finishing up with Punk making Jericho tap to the Anaconda Vice.

The Rock defeated John Cena – This was what everyone came to see.  The atmosphere was electric, and it really felt like a once-in-a-lifetime match to see.  The Rock looked to be a bit exhausted, which is to be expected after being away from the ring for so long.  The match still came off great, with the crowd reactions really making the match.  As Cena went to mock The People’s Elbow, The Rock popped up and delivered a Rock Bottom for the 3 count.  The crowd went nuts, as I don’t think anyone expected The Rock to beat Cena clean in the ring.  Cena sat on the ramp outside with a shocked look on his face.  This is the type of match that really has you wanting to watch RAW and see where things go from here.

Some people loved it, some people hated it, but everyone is talking about it.  Finally, this year FELT like WrestleMania with the matches to back it up.  In recent years it’s felt like just the NAME WrestleMania is what WWE was riding on, just giving us good matches but nothing ONCE IN A LIFETIME.  This year they did it right, and the happy ending along with the fans’ reaction is what legendary WrestleManias are made of.