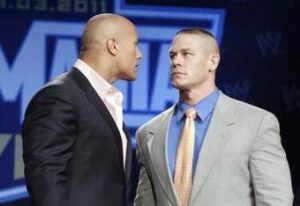 WrestleMania weekend is here and I must say, WWE has gone all out this year to bring back the feeling that has been missing for a few years in my opinion. To me, the past few years have featured one or two interesting matches, with the rest of the card filled out with matches that could be on any other PPV.  The return of the Rock was a huge boost, Steve Austin back in the mix is always a plus, and a huge Hall of Fame have all added to the WrestleMania hype.  Let’s take a look at the full Wrestlemania 27 card:

This match HAS to be the main event in my opinion.  This match will have the most “Mania Magic,” whether it’s dueling chants for Miz and Cena or the involvement of The Rock, this match is going to be the big one this year.  It’s great to see the WWE Championship match finally feel like a big deal again at WrestleMania.  Here’s to hoping The Rock causes Cena to lose and their awesome feud will continue.  ANYthing but The Rock shaking hands with Cena PLEASE.

I’m glad Alberto Del Rio has gotten the big push, as it has to lead to a fresh World Title match at WrestleMania that we can’t say we’ve seen countless times already.  A few months ago I posted that Alberto Del Rio would be a headlining star in no time, and here he is as possibly the next World Champion.  Rumors of a Christian heel turn have popped up, and that would set up some interesting possibilities post-WrestleMania if that happens.

The Undertaker vs. Triple H

Even though Triple H vs. The Undertaker happened at WrestleMania 17, WWE is going with it again as one of the main matches this year.  Of course 10 years ago Triple H was just getting started as a main eventer, so this year’s match does feel more like an “Icon vs. Icon” type match.  Rumor had it this match was scheduled at some point to go on last, but I hope that is not the case because it won’t feel as big as Cena vs. Miz with The Rock involved.  This one should be good, but there is no way it can top The Undertaker vs. Shawn Michaels from the past 2 years.  My prediction is The Undertaker’s streak goes to 19-0 and Triple H will join Shawn Michaels and Kane as guys that have been beaten twice along the streak.

This match has a decent story leading into it.  Punks performance is what has carried it, and his “Randall Keith Orton” references are always entertaining.  Randy Orton has once again become a little too “facey” for me, and his over-dramatized mannerisms have gotten corny.  Luckily Punk is good enough to still make this an intriguing match.

This match probably has the best story of all leading into the match.  For anyone that is a fan or has seen classic Memphis wrestling, this story has had a lot of the same realism and heat.  A great natural build that fans saw progress for months, stemming from Cole’s love for The Miz.  Also special because it will be Lawler’s first-ever WrestleMania match, which has been something that has been talked about for years.  Even Jack Swagger has gotten a much-needed rub from this angle and is in a much bigger role thanks to this. Add in the legendary “Stone Cold” Steve Austin, and you have a match that will have the “Mania Magic” regardless of the actual in-ring quality of the match.

This is the dark horse interesting match on the card.  I honestly haven’t cared about anything Rey Mysterio has done in years.  His World Title reigns have been a joke, as he’s just too small to be believable. Most everything else he’s done is lame and repetitive, but this year they actually have a nice little story going for him that makes sense.  The angle with Rhodes blaming Mysterio for injuring his “dashing” face is very old school, and has had a nice slow build that will culminate with this match.  The Dusty Rhodes turn on Rey a few weeks back was a very nice touch on this one.

This is the match many fans are complaining about, I on the other hand think it is a perfect fit for a WrestleMania match.  You have a celebrity that (like her or not) gets coverage on every major media outlet, and enough workers involved to keep things smooth.  Trish Stratus returning to the ring on its own is a major plus that can’t be overlooked as the Diva division has become super weak and no one seems to care like they did when Trish was around.  This match qualifies as something you would only see at Mania and will bring the press that will make the event seem like the true Super Bowl of wrestling.

They had a great match a few weeks ago when Sheamus won the belt but doesn’t feel like too huge of a match.  It won’t be bad wrestling-wise, but will definitely be early on the card due to the non-hype I’m sure.

This is the throwaway match.  The Corre was great as “The Nexus,” but the move to Smackdown has knocked them down a level even though they hold some titles now.  After Monday, the opposing team is a total comedy act so this won’t mean too much.

Overall a very promising card that will hopefully deliver.  Some glaring omissions include there not being a Money in the Bank match (due to it having its own PPV now,) no Tag Team, Intercontinental, or Divas title match (unless there is a Divas title match as a pre-show match.)  This year seems much more driven on good stories and special appearances, unlike last year which only had a couple of stand out matches going in.  Hopefully on Sunday night, we can report that Mania was great and opened the door for a lot of great stories that will unfold post-WrestleMania.

And for anyone in the Atlanta area or anyone planning a last-minute trip, WrestleMania tickets are still available.