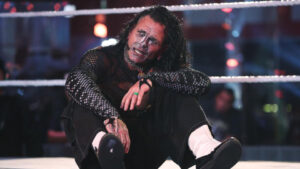 The years-long saga of Jeff Hardy’s personal struggles has added yet another chapter, as Hardy has been released by WWE following reports that he was in “rough shape” at a house show in Edinburgh, Texas.

Video has surfaced online from the above-mentioned house show and seems to show Hardy to be “sluggish” during his entrance, but the real red flag seemed to be when Hardy simply went into the crowd toward the end of the match and never came back to the ring. Reports were that Hardy had been in “rough shape” but no further detail was available at the time. Today’s word is that Hardy was offered help and rehab by WWE, but refused, and was therefore released.

This whole story seems to read like one we’ve unfortunately read several times before. Hardy’s well-documented substance abuse problems were just recently talked about during his appearance on “Broken Skull Sessions” with Steve Austin, where Hardy even detailed his infamous TNA PPV match with Sting where he was in no condition to perform. Since the Hardys return in 2017, Hardy has had a few alcohol-related incidents after shows, but this one affecting his performance DURING a show seems like the last straw. At this point in Hardy’s career, there has to be major doubt that he will ever compete in WWE again.

Jeff Hardy had just re-signed with WWE and brought his previous theme music “No More Words” back as part of the deal, which seemed to signal both sides were in for the long haul. It even seemed like Hardy would be in line for a run with Roman Reigns, especially since the company is hurting for stars and Hardy has always been a guy that can fill a main event role.

Of course, the question of Hardy going to AEW will be brought up since A. Matt Hardy is obviously there and B. ANYone released by WWE gets the AEW question, especially a main event talent like Hardy, but Hardy’s health is obviously going to be first and foremost wherever he goes. Sadly, it may be at a point where companies are afraid to use him and take any blame for furthering his issues that never seem to fully get taken care of.