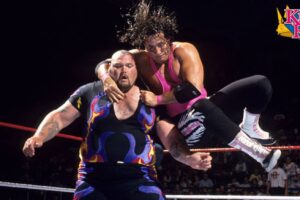 If you were a WWE (WWF) fan in the ’90s, you know there were only four pay-per-views a year and they were set in stone. The Royal Rumble, WrestleMania, SummerSlam, and Survivor Series were the events the fandom revolved around, they were almost like holidays. When you break it down, that means after WrestleMania, there were no WWF PPV events until Summerslam…that was until 1993 when things changed.

To say it was a huge deal that the King of the Ring was finally airing on PPV in 1993 would be an understatement. The event had actually been going on for 8 years but was never televised, leaving results from magazines as the only source to get results of the event. At the time tournaments in wrestling were still intriguing because of the possible matchups that you normally wouldn’t see. Of course, looking back, the 1993 King of the Ring tournament was basically a vehicle for Bret Hart to regain some footing after his loss to Yokozuna at WrestleMania 9 and subsequent removal from the WWF Title picture due to Hulk Hogan stepping in (more on that later.)

So not only do we finally get a PPV between WrestleMania and SummerSlam, but also a tournament that could go in numerous directions, and on top of it all a WWF Title match as the icing on the cake. Yes, the much-talked-about Hulk Hogan vs. Yokozuna rematch took place on this card after Hogan’s controversial title win at WrestleMania 9.

As far as the actual tournament, to most fans, the brackets looked almost predictable when it came to who would be in the finals. Bret Hart of course was a favorite and was at the top of the bracket, while “The Narcissist” Lex Luger, who Bret had been feuding with, was at the opposite end. It was such a fun era, the predictability didn’t matter and things didn’t work out that way anyway.

What we got was Bret Hart taking on Razor Ramon in the first match on the show – a match that was the WWF Title match just 5 months earlier at the Royal Rumble. These days, we’re used to big matches possibly kicking off PPVs, but back then things were usually built progressively. Here, there was electricity in the air for such a big match to kick off.

After Bret defeated Ramon, another interesting possibility presented itself – a Bret Hart vs. Mr. Perfect match in round 2. This could be a rematch from their 1991 classic, but with both being “good guys” here, it wasn’t likely. So imagine the feeling when Perfect actually pulled off the win over Mr. Hughes and the Mr. Perfect vs. Bret Hart match was set:

Aside from being a classic match in general, the above match was awesome because this was an era where things made a lot of sense. Sure Mr. Perfect had turned face, but he wasn’t coming out smiling and slapping hands, there was an animosity about him in this match, a tip of the hat to the fact that Bret took the Intercontinental Title from him and he was still bitter about it. Even after Bret pulls off the win, Perfect keeps his edge and shows that good guys can still be badasses.

Since the tournament was spread out over this night, the WWF Title match fell in the middle of the card. I viewed Hogan vs. Yokozuna as simply Hogan tying up the loose end and getting a real victory to solidify 5th WWF Title reign. This was the next coming of Hulkamania and it was just getting started…but it wasn’t

Hulk Hogan’s first televised singles match in over a year, ended up being his last televised WWF match for 9 years. Hulk’s loss made everything feel unpredictable, and things weren’t clear at all as far as where things were going next.

Back to the tournament, Bret was in the finals as predicted, but Lex Luger had been eliminated due to a time limit draw with Tatanka, therefore Bam Bam Bigelow had advanced to the finals to battle Bret. WWE tried another curveball by initially having Bigelow win due to interference from Luna Vachon, but things were reverse and Bret Hart was victorious and crowned King.

So Yokozuna was champion, Bret Hart was King, so where would things go from here? Would Bret get his rematch for the title at SummerSlam? Where would Hogan fit in? Well not so fast, because at the end of the event, in a very nontypical WWF move, the event ended on a sour note as Jerry “The King” Lawler emerged as Bret Hart’s next feud after attacking him during his coronation. To see Lawler, who had just been “around” since that year’s Royal Rumble suddenly in a main spot was a big shift in where things would go next.

King of the Ring 93 was a fun event as a kid, and still fun to look back on all these years later. In many ways, it was the end of an era, as by SummerSlam two months later things already felt very different in the company.