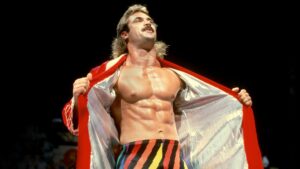 WWE is justifying another long overdue Hall of Fame induction this year as “Ravishing” Rick Rude is the latest inductee into the 2017 class.  When I say long overdue, one of the reasons is that Rude’s name comes up almost any time a legendary figure is asked who should be in the WWE Hall of Fame but isn’t yet; finally, this year the Hall becomes “Simply Ravishing.”

Rick Rude (real name Richard Rood, always cool to know he used a variation of his real name) was regarded as one of the toughest men in wrestling behind the scenes, regardless of the cocky heel persona that he played to perfection.  I first saw Rude in the Von Erich’s World Class Championship Wrestling where Rude was the promotion’s first World Heavyweight Champion after they withdrew from the NWA in 1986.

Just a few months later, Rude was actually in the NWA and within a few months a holder of their tag team championship with “The Ragin’ Bull” Manny Fernandez.  The team really stood out to me as they quickly defeated fellow 2017 inductees The Rock ‘n” Roll Express for the belts and also had a memorable feud with The Road Warriors.  “Rude “n” Ragin” competed as the number 1 seed in the 1987 Crocket Cup and seemed poised for a possible lengthy title run until Rude made yet another jump, this time to WWE. In fact, Rude left before dropping the NWA Tag Titles which created a situation where the promotion had to air a previously taped match and claim The Express won the belts back, but it was actually a “phantom title change” due to Rude’s departure.

Rude debuted in WWE in the summer of 1987 as a member of The Heenan Family, and Bobby Heenan remained his manager for his entire WWE run from 87 through 90.  Rude created so many memories in WWE as it seemed like every feud he was involved in left a mark in history in some way.  From his initial feud with “Mr. Wonderful” Paul Orndorff to his unforgettable feud with Jake Roberts which saw Rude wear Roberts’ wife’s face on his tights, Rude’s impact in WWE was felt immediately.

Rick Rude’s most memorable WWE feud may have been his ongoing battle with The Ultimate Warrior; it all began with the two feuding over who had the better body which saw Rude attack Warrior during a posedown at Royal Rumble 89.  This situation lead to an Intercontinental Title match between the two at WrestleMania 5 which saw Rude win his first championship in WWE after interference from Heenan.  Rude held the title until SummerSlam 89 where he dropped the title back to Warrior.  While Rude would go on to feud with Roddy Piper after this, he would cross paths once again with Warrior at SummerSlam 90 as their feud ended inside a steel cage at the event.

Not long after his big main event match at SummerSlam 90, Rude departed WWE and debuted in WCW about a year later.  Rude’s name value had skyrocketed since his prior run in the former NWA, and he immediately entered into a feud with Sting, defeating him for the United States Championship within a month.  Rude remained a main eventer in WCW for the remainder of his career, winning numerous titles and being involved in memorable feuds with Ricky Steamboat and Ric Flair before suffering a neck injury that ended his in-ring career.

Even though his career as a wrestler had ended, Rude remained in the spotlight as he spent time in ECW before returning as a bodyguard to the first version of Degeneration-X in WWE.  Rude made headlines once again as he appeared on both RAW and Nitro in the same night as he made yet another jump back to WCW on a live Nitro, while also appearing on a previously taped RAW.  Rude appeared in WCW as a member of the nWo alongside longtime friend Curt Hennig before leaving the company in 1999, the same year of his untimely passing.

“Ravishing” Rick Rude was a character like no other, the type a talent could only hope to capture in this era.  Rude will be inducted by former rival Ricky Steamboat who will undoubtedly be able to get across the respect due to the one and only Rick Rude.