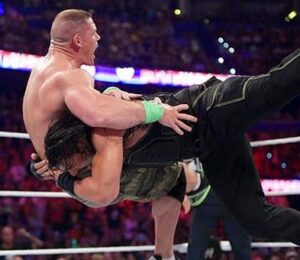 WWE’s Battleground pay per view is in the books, and as expected it was pretty much a build-up show to next month’s SummerSlam which is considered the second biggest show of the year behind WrestleMania.  Below are the full results of Battleground along with a brief description of all the happenings:

This match was pretty much a vehicle to further the situation between Fandango and Layla/Summer Rae; Rae and Layla accompanied Rose’s “Rosebuds” to the ring for the match.  Of course, Summer and Layla distracted Fandango and ended up slapping him, ultimately causing Fandango to suffer the loss.

The battle of the former “Funkadactyls” saw an upset win for Cameron, as Naomi has always been regarded as the one with all the ability.  Cameron did pull the tights for the win which will of course lead to more between these 2; Cameron’s natural bitchiness comes off well in her new role.

These two teams seem to be wrestling each other on a weekly basis lately, but tonight they pulled out an outstanding performance that pretty much stole the show.  The near falls and hard-hitting action had the crowd on their feet as the Wyatts took the first fall, and the Usos took the second and third for the win after finally hitting a double splash off the top rope onto Harper.

This was the rematch/rubber match between the “frienemies” Paige and AJ, who have swapped the Divas title and are now engaging in an awkward friendship that seems like it could violently explode at any moment.  Throughout the match, Paige kept pleading with AJ but it was unclear if she wanted AJ to quit or fight harder.  Have a feeling Paige is about to snap and turn into the “anti-diva” persona that she was known for in NXT.  AJ got the pinfall after a “shining wizard” on Paige.  Have a feeling this issue is far from over as well.

This match had some good heat going on, with the built-in Russia vs. USA theme.  I would’ve predicted a clean win for Rusev here, but almost glad they furthered this feud a bit since the fans seem to care about this feud and Swagger had Rusev locked into the ankle lock at one point and it came across like Swagger may have Rusev’s number.  Swagger was knocked out outside the ring and was counted out; Rusev attacked Swagger after the match and that will probably be the cause for a rematch possibly as soon as RAW.

This match never took place as Ambrose and Rollins brawled backstage earlier in the night and C.O.O. Triple H had Ambrose thrown out of the building.  Rollins still came out and was awarded the victory, but Ambrose returned and the two brawled all over the arena once again.  Later in the night, the fight continued once again out in the parking lot after Ambrose popped out of Rolllins’ trunk and started things up again.  Rollins sped away from Rollins in his car and this will also be something that continues on RAW and most likely into SummerSlam.

This one came as a bit of a surprise, as I figured there would be some sort of crazy ending to further this feud, but Jericho won clean with the Codebreaker.  There will probably still be something on RAW that furthers this, and Wyatt will most likely come out on top as this feud progresses; another likely SummerSlam rematch here.

Another surprise here as The Miz pulls the “goes through the ropes and hides until the end” routine to win.  Pretty decent battle royal here with a few exciting moments, which is the norm when Kofi Kingston is in this type of match.  The final 2 were Dolph Ziggler and Sheamus and just when it seemed Ziggler had won, The Miz creeps back in and tosses him for the title win.  Not overly excited about the finish; I feel like we’ve seen The Miz in this role before, and Ziggler is the guy the fans really want to see elevated again………The Miz – not so much.  This may all build to Wade Barrett returning when he returns from his injury to chase The Miz.

This match was pretty much ruined by the fact that WWE is already airing commercials for Cena vs. Brock Lesnar at SummerSlam, and WWE didn’t throw any swerves at us as Cena did indeed get the win.  Roman Reigns is obviously being groomed as a future champion, but that road will most likely lead to WrestleMania 31 for him.  A decent fatal 4-way here, just nothing surprising.  Cena stands tall at the end raising his titles just like we’ve seen many times over the past 10 or so years.

There you have it, WWE Battleground 2014 full results and our thoughts on the show – Not a bad show to watch especially if you have the WWE Network.  What did you all think of the show?