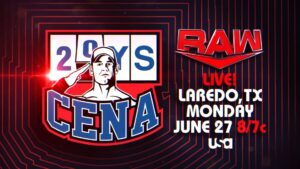 As soon as the severity of Cody Rhodes’ injury was known and given the fact that surgery will be necessary, it was clear that WWE was going to need some top star power. Consider that gap filled (at least temporarily) as John Cena’s WWE return has been officially announced for the June 27 episode of RAW from Laredo, Texas.

The June 27th RAW also happens to be the last episode before the Money in the Bank event, so it wouldn’t be a shock to see Cena throw his name into the mix and jump right into the WWE Undisputed Universal Title picture. As for how long Cena may stick around, that remains to be seen, but it would be hard to imagine him not also taking part in the SummerSlam PPV and/or any of the big stadium events coming up.

Since we’ve already seen Cena take on Roman Reigns, it should be interesting to see who Cena is involved with during this run. Theory is a top candidate being Cena has teased confronting him via social media. Also, Seth Rollins amped things up after his attack on the already-injured Cody,  so he’s another top name that could be involved with Cena.

Officially, John Cena is coming back on June 27th to celebrate his 20-year anniversary with WWE, but one would guess that this will be more than a one-off appearance.