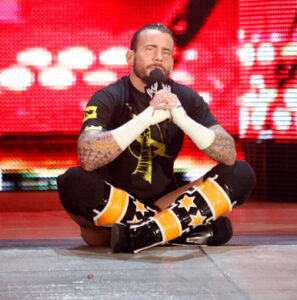 If you watched RAW last night you saw that CM Punk’s big announcement was that he is leaving WWE when his contract expires on July 17th, which is the date of WWE’s next PPV Money in the Bank  For anyone wondering, it is true that Punk’s contract is expiring on that date and that he does plan to leave WWE.  It’s surprising WWE is allowing Punk to work this story being it is a very real situation.

Punk posted on his Twitter page that he would go out with a bang, and what’s interesting is that he used the exact wording in his tweets that he used in 2005 when he posted online about leaving Ring of Honor for WWE at the time.  In ROH, Punk won their title upon his exit, and now the same story seems to be playing out in WWE.

One thing is for sure, CM Punk has brought his “A-game” to WWE in recent months, creating interest both on TV and in his online presence by speaking honestly on things that normally wouldn’t be said by a WWE employee.  Now we are left to wonder if this is all a story that will see Punk stay in WWE with an even bigger following than before?  Or will Punk indeed leave WWE as he has stated, and become wrestling’s hottest free agent.  No one really knows, which makes this story great.  If he is indeed gone, will he create a major buzz by returning to ROH?  Or can TNA/Impact Wrestling do what is necessary to bring him in and use him correctly?  We have a month of what should be great TV leading up to the culmination of this great story/shoot, however it turns out.