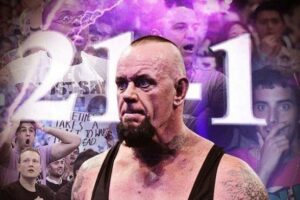 WrestleMania 30 was an event that delivered on many levels; in recent years it’s felt like each year’s hype for WrestleMania exceeds what takes place, but this year WWE really delivered an event that actually exceeded the hype.  One event in particular delivered a moment that will never be forgotten in the annals of WWE and WrestleMania history – the end of The Undertakers historic undefeated streak.

Leading up to WrestleMania 30 I was firmly convinced that The Undertaker would extend his streak to 22-0 without much chance of anything different.  I watched live as The Undertaker defeated Jimmy Snuka at WrestleMania 7 and every one of his victories since.  It seemed that Undertaker getting past young lions like Randy Orton and Edge at WrestleManias over the years showed that the streak would remain a solid part of WrestleMania, and if it were to ever be broken it would be to a similar young lion that would “receive the torch” so to speak; even the thoughts of John Cena eventually ending the streak seemed like a possibility since he would be the remaining “top star” to challenge it.  All of these thoughts added to the utter shock felt by the wrestling world as The Undertaker was defeated cleanly by Brock Lesnar at WrestleMania 30.

After letting things set in for a couple of days now, I believe I can actually say that I’ve never seen a crowd reaction like the one seen as the referee counted three thus ending The Undertaker’s streak last Sunday; the collective gasp, the shocked faces, the tears…it showed just how much WWE fans were invested in The Undertaker’s WrestleMania legacy.

So the big question now is “WHY?”  Why end the streak, why Brock Lesnar, why now?  I think the answer lies with the fact that the streak has become such a part of WrestleMania that it’s become expected that The Undertaker will win every year, and the only way left to truly create a magic moment was for it to end.

Why Brock Lesnar?  I think that fact lies in the reality that Brock Lesnar is one of the most legit tough guys in wrestling.  A casual fan can look at Brock Lesnar and his reputation and believe that he would beat The Undertaker in a fight.  That was the main problem last year – CM Punk is great and all, but did he really look like a threat to “the deadman?”  The real shock for me was that it was Lesnar who is only a part-time guy in WWE, which I would’ve guessed would have prevented him from being the guy to receive such an honor.  In the end,  The Undertaker lost to a guy with a legit major reputation in both the wrestling and MMA worlds, and I believe many answers lie in that.

With The Undertaker getting older, he likely doesn’t have a lot of the 5-star matches left that he is known for at WrestleMania (he even sustained injuries in this match and spent the night in the hospital) so ending his WrestleMania legacy with a true moment does seem fitting.  Would it have been better for ‘Taker to lose to a new guy that was an obvious threat to the streak?  Should it have been a guy like Cena which many fans would have literally turned away from the product over?  Or was it best to lose to someone with a legit reputation that extends beyond the wrestling world?

One thing is for sure, The Undertaker’s streak will be a part of WrestleMania history forever.  The historical end to the streak will air for years to come and will be a major part of the reason WrestleMania 30 will be looked back on as one of the truly memorable “Manias.”  While there is no word on whether The Undertaker’s career is over, he will always top the list of all-time legends in WWE.  Much respect is due after his performance last Sunday, and the term “best for business” was taken to a whole new level by probably THE most respected wrestler in pro wrestling.