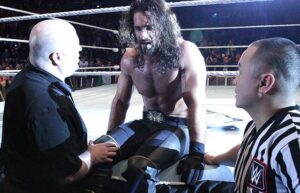 In what has to be considered one of the biggest shakeups seen in WWE in recent years, it has been announced the WWE World Heavyweight Champion Seth Rollins suffered a knee injury on the overseas tour that will put him out of action for 6-9 months.  Due to the circumstances, WWE has announced that Rollins has been stripped of the championship and a tournament will be held at Survivor Series to crown a new champion.

The timing of course couldn’t be for Rollins as he’s been pushed as WWE’s top guy for months now and undoubtedly would’ve had a big role at WrestleMania 32.  Rollins was set to take on Roman Reigns at Survivor Series and the outcome would’ve probably made it clear as to what the title picture would look like going into WrestleMania season.

Now that Rollins is out, WWE is in a very interesting spot being John Cena just began a stint of time off for an unknown project and Brock Lesnar reportedly wasn’t in the plans for the rest of the year.  The obvious result at Survivor Series would be Reigns taking the title, but booking him in a feud that won’t see the ratings sink even further will be a challenge.  Will WWE take this opportunity to call Cena or Lesnar back early, or maybe even utilize the anniversary of The Undertaker’s debut as a selling point for the tournament?

That’s the real question – who will be in the Survivor Series tournament?  Some of you may remember the 1998 Survivor Series which propelled The Rock to main event star status, and we’d like to think WWE could do the same for a guy who hasn’t had a shot yet or maybe even an NXT star.  The ratings haven’t been good as of late, and a fresh boost and a new direction are just what the main roster needs right now.

While things may end up predictable to a degree if Reigns wins the title, Seth Rollins’ injury shakes up the big picture from now until WrestleMania 32 and it should be interesting to see what direction WWE takes things from here.