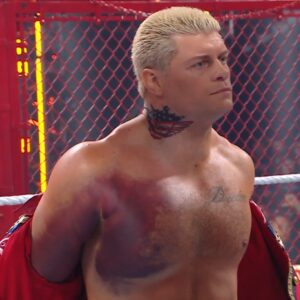 We started reading rumblings last night about an injury to Cody Rhodes that cast at least some doubt on his match with Seth Rollins at Hell in a Cell. Then Rhodes was announced as unable to compete at last night’s live event due to injury. Earlier today though, it was announced that Rhodes would indeed compete despite confirmation of a partially torn pectoral muscle.

The “partial tear” didn’t sound too terrible, that was until Rhodes removed his jacket at the beginning of his match with Rollins. The crowd collectively gasped at the brutal discoloring on Cody’s chest, and it was clear almost right away that Cody couldn’t even fully raise his right arm.

“For the love of the game.” – @CodyRhodes #HIAC pic.twitter.com/3bHlLl5UB9

There was a lot to take in during all this – the fact that Cody still went out and performed, the fact that WWE allowed him to do so, and the fact that this was a full match that wasn’t cut short are all pretty mind-blowing. As the match began, Cody seemed unable to use his right arm much, and it seemed like things may end early just to get Cody out of there. Instead, Cody put on one of the most memorable performances ever given the circumstances.

The other big shock here is that Cody pulled off his third PPV victory over Rollins. With such a brutally obvious injury, it was almost certain Rollins would get a win back since Cody almost surely will have to undergo surgery soon. Instead, Cody looked like the top face in the entire company, solidifying his position for an eventual clash with Roman Reigns. Cody even survived the split Chicago crowd who even started a “thank you Rollins!” chant at one point as Rhodes was being punished (undoubtedly some still-hostile AEW fans.)

We’re waiting for an update as far as Rhodes’ injury, probable surgery, and how long he may be out. One thing is for sure, Rhodes proved just how much heart he has by even going through tonight’s match with such a significant injury.