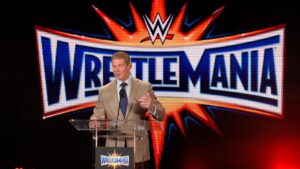 With WrestleMania 33 in Orlando being less than two months away, the speculation on the card is at an all-time high since most of the matches aren’t exactly clear right now (not to mention an injury may cause a change to one of the biggest matches on the card.)

Today we’re taking a look at the current card that is rumored for WrestleMania and how we might get there from where things stand in WWE right now:

Goldberg vs. Brock Lesnar for the Universal Championship – Wait, what? Neither man is the Universal Champion and it seems odd for one of them to get it at this point, but rumor is that Goldberg will challenge champion Kevin Owens at the Fastlane PPV and go into Mania as champ.  Lesnar finally getting his win back seems to be a lock, but where would he go from there as Universal Champion?

Bray Wyatt vs. Randy Orton for the WWE Championship – Yes, again, neither man is the WWE Champion but apparently Wyatt is a favorite to win the Elimination Chamber match and the title, which would set up a match with his partner Randy Orton who of course won the Royal Rumble and the WrestleMania title shot.

Charlotte vs. Bayley vs. Sasha Banks vs. Nia Jax for the RAW Women’s Championship – This one makes sense since Sasha has been feuding with Nia and Charlotte with Bayley, and of course, Charlotte has a well-known history with Sasha.  Charlotte defending her title AND PPV undefeated streak against 3 ladies seems WrestleMania worthy.

Seth Rollins vs. Triple H – This is the match that has been the clearest as their feud kicked into high gear especially after Samoa Joe’s debut, but this is the match that is now in jeopardy as it has been reported that Rollins has re-injured his surgically repaired knee and it is unknown whether he will be ready for WrestleMania at this point.

Kevin Owens vs. Chris Jericho – Yet another match that has yet to be set up, so if the rumors are true, the “best friends” may be having a real breakup in the next few weeks and will end up as opponents.

Roman Reigns vs. The Undertaker – We saw this set up for this at the Royal Rumble as Reigns eliminated The Undertaker – expect one of the biggest one-sided crowds ever as Reigns is already hated enough without taking on WWE’s greatest legend.  Hopefully, this won’t be a “passing of the torch” moment because Reigns beating Undertaker will be booed out of the building.

The Big Show vs. Shaquille O’Neal – You know what this about if you saw the Andre the Giant Battle Royal at WrestleMania 32 last year; O’Neal was a surprise entrant into the match and began a year-long feud with Big Show that will apparently culminate at this year’s show.

John Cena and Nikki Bella vs. The Miz and Maryse – Another “out of nowhere” match and definitely not a mega-match that you would expect Cena to be in.  Maryse is a former Divas Champion so she can hold her own in a match, but right now there is no heat between her and Nikki so expect something there.  We’ve also heard rumors of Nikki being injured and this would be her last match, but take with a grain of salt at this point.

AJ Styles vs. Shane McMahon – Maybe the biggest “HUH?” match on the rumored card.  We’re guessing AJ would raise hell about the way he is promoted on Smackdown to the point he draws Shane back into the ring.  Is it a waste of WWE’s best performer in Styles?  It depends on the story because we know Shane always goes all out.

Andre the Giant Battle Royal – The yearly match for all of the other talents, and hopefully some surprises as well.  This match really launched Baron Corbin last year and could do the same for someone else this year.

So there is the rumored WrestleMania 33 card as of now; do you think it’s WrestleMania worthy? Of course, there will also probably be more matches added for the pre-show since the Intercontinental Title,  Smackdown Women’s Title, both tag titles, and cruiserweight titles are all missing from the card as of now.  It will be interesting to check back in a month and see how many of these matches are made official.