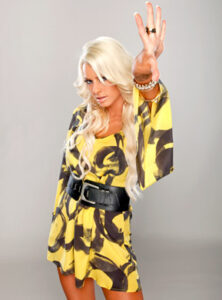 Some very surprising news to report today, as Maryse Ouellet was released by WWE.  The move is quite a surprise because Maryse was always said to be a favorite of Vince McMahon (and who can argue) since  she is obviously hot, but also  unique and has great charisma.  Maryse had also reportedly been dating The Miz for a while now, which also makes this release surprising since The Miz is still receiving a sizable push in WWE.  Prior to her release, Maryse has been sidelined with an abdominal hernia that required surgery but was said to be close to being able to return.

Maryse signed debuted in WWE in 2006 after competing in the Diva Search competition.  She was molded into a great character over time and eventually became decent in the ring as well.  Prior to her time in WWE, Maryse posed for Playboy and won Miss Hawaiian Tropic Canada in 2003.

Maryse had a presence unlike any other WWE Diva and eventually had a great run as Divas Champion.  She would be a huge pick-up for TNA if she is interested in going there, and I’m sure they’re already looking into it.  Maryse didn’t seem to broken up about her release, as she wrote on her Twitter:

“I’M OUT and sexier than ever! Thanks to all my fans, colleagues and @WWE Universe. Time to party! “Release” party tonight at @trousdale LA”

So it seems like Maryse might be happy to be free from WWE and their TV-PG ways. Maybe (hopefully) we’ll see her return to doing some Playboy or other type modeling, or maybe in TNA where things are a little freer. Maryse will definitely be popping up somewhere since she has star power that will bring her success wherever she goes.