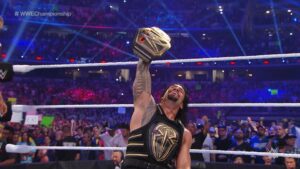 WrestleMania 32 was definitely not the most hyped WrestleMania ever when it comes to the card; with matches still being announced just last week and many of the matches overall not having a WrestleMania-worthy feel to them, it was a night where no one really knew what to expect.  As usual, rumors swirled about surprise appearances that could change the WWE landscape, and while there were surprises, they were not what we expected and they likely won’t change the WWE landscape in the long run.

Here’s a quick rundown of the results and a few thoughts:

This match kicked off the festivities with probably half the crowd inside the stadium due to a ticket issue early on.  The size difference here is just hard to believe for any old-school fan, especially since they had a lengthy match.  The finish was good enough with Kalisto pulling off the victory after Ryback hit an exposed turnbuckle.

The yearly match to get all the Divas involved in, but at least they’re given more time this year.  As expected, the crowd hates Eva Marie no matter what team she’s on.  Brie Bella picks up the win in what could be her final WWE match based on various reports.

The Usos defeated The Dudleys

Is there even a point for the Dudleys to be around anymore?  They came back as good guys and lost to all the bad guys, now they turned and continue to lose every match.  The crowd hated the Usos and loved the Dudleys, but the crowd got to see the Dudleys go through tables instead of what they wanted.

This was one of the big surprises of the night, as the fans wanted Zack Ryder to be a star about 5-6 years ago but WWE totally dropped the ball with him.  He’s been doing a whole lot of nothing on WWE TV in recent years, and even returned to NXT and had been part of a tag team with Mojo Rawley that seemed like it might be something.  Then out of the blue, Zack Ryder is replacing Neville at WrestleMania and now he’s the Intercontinental Champion.  Ryder would’ve been the last guy I would have predicted to win this, so it’s always nice to see a surprise winner these days.

We read a lot of complaints about this one, the only thing we can think is this is another “welcome to WWE” decision since Styles is the guy coming in with momentum and Jericho is a veteran who is in and out of the company. Decent match, but we’ve seen it a few times already so didn’t feel like a huge Mania match.  We get Jericho getting a win a few weeks ago to further the feud, but Styles losing at WrestleMania?  Seems a bit off if you have any hopes for the guy to be a star.

The League of Nations defeated The New Day

Another head-scratcher here as the League of Nations has to be the most unexciting group in WWE by far; when the fans boo them, you know it’s because they can’t stand seeing them on their TV, as where New Day is one of the most over acts right now, so this results really makes no sense other than the fact that Vince McMahon loves big international guys.  After the match, the League got on the mic and proclaimed no other 3 man group could beat them……cue Bullet Club?  No, Actually…..

Shawn Michaels music hits, followed by Mick Foley, and finally “Stone Cold” Steve Austin.  Now don’t get me wrong, seeing these guys come out was awesome, albeit a bit…..odd?  HBK comes out in his ring gear, which I guess we’re supposed to believe he just threw his gear on just in case?  And these 3 are just random legend choices that don’t have much connection.  Fun segment where the legends beat up the League and eventually Austin even stunned Xavier Woods for trying to make him dance.  Of course, we had a beer bash and fun was had by all – fun segment even though it lacked logic, maybe I’m just too old school.

Not a lot to say here, this match was about what you would expect – Ambrose getting thrown around by Lesnar, Ambrose getting a little comeback on Lesnar, but Lesnar ultimately winning.  Some may say Ambrose should’ve won, but I just never saw this in the cards.

That’s right, WOMEN’S Championship.  It was announced earlier in the night by Lita that the Divas Title was being retired and being replaced by the Women’s Championship.  Goodbye butterfly Divas title. Sasha had a superstar entrance as she was accompanied by her cousin and new Hall of Famer Snoop Dogg. Great match here as expected.  Charlotte winning wasn’t the popular choice and Ric Flair interfering yet again seemed to bring down the overall presentation of it all.  Looking for something to develop on RAW to right the wrong in this situation.

The Undertaker defeated Shane McMahon *Hell in a Cell*

Going into this match, it was almost guaranteed there would be a surprise or two because there was no way Shane could win without them; well there were no surprises, and Shane didn’t win, pretty cut and dry.  Shane came out with his sons which was a cool moment to see the future McMahons, but other than that it was the typical story of the underdog Shane giving everything he had to defeat the WrestleMania legend.  If only one man in HISTORY has ever defeated The Undertaker at WrestleMania, how are we supposed to expect a non-wrestler to do it without any outside help? Shane did do his expected death-defying stunt in the match, which was jumping off the top of the cell and crashing through an announce table, missing The Undertaker. It looked like a highly dangerous spot especially for this era, but that’s Shane McMahon for you. 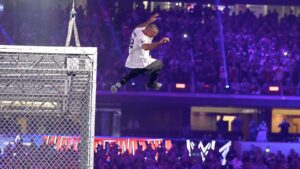 I have a feeling this will either A. reveal Shane was just in for one match to help the card because it was really weak without something special, or B. Shane will still somehow control RAW due to a loophole. Another situation that will probably be a big (if not the biggest) story that plays out on RAW tonight.

Another major surprise here as Corbin wasn’t even announced as being in the match.  Speaking of surprises, we also had surprised entrants such as Diamond Dallas Page, Tatanka (who just appeared in the ring without an entrance,) and of all people, SHAQ!  Yes, Shaquille O’Neal made his in-ring debut as a surprise participant.  Corbin eliminated Kane for the win, so it’s nice to see a new guy get a big push, but it remains to be seen if it lasts.

Wait, what? Was this a WrestleMania match?  No?  Yeah, we were confused too.  So the Rock has promised a WrestleMania 32 appearance for months now, and it seemed like he had big things planned.  Well, The Rock came out with a flame thrower….because fire is spectacular I guess.  The Rock went on to announce that the WrestleMania 3 crowd had been broken as expected, and then he was interrupted by the Wyatt Family who had been oddly absent from the WrestleMania card.  Before we knew it, The Rock was calling for a match right then and there, and just like Shawn Michaels earlier, The Rock just happened to have his gear on under his clothes, and we had a bonus match….kind of.  Actually, The Rock just delivered a Rock Bottom and pinned Rowan in 6 seconds….a new WrestleMania record.

Were people excited over all this? Disappointed we didn’t get a full Rock vs. Bray Wyatt match?  It was all so fast and confusing, it’s hard to say.  The Wyatts were set to attack The Rock after the match, but John Cena made a surprise return and helped clean house – and we got to see the former rivals Rock and Cena stand tall.  Cool moment to see big stars coming out for the year’s biggest show, but it didn’t seem like it would lead anywhere else after this one-night thing. 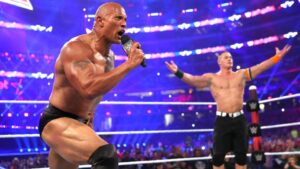 Another match here that could have led to surprises or a twist or….something.  Instead, we were back to the old formula of “expect the expected.” Cool entrance by Triple H as usual, the crowd hated Roman Reigns as expected, and the only real big moment was Stephanie McMahon finally getting hers as she was accidentally speared by Reigns (the man-on-woman violence rule must’ve been dropped for at least 1 night.)  Reigns wins in a pretty anti-climactic finish (other than that Stephanie spear,) the crowd still hates him and will continue to, and WWE will continue not to care what fans think apparently.

Overall, I did not hate WrestleMania 32, it was a good show with entertaining moments, but wasn’t the biggest feeling WrestleMania either.  We had a lot of “1 night only” moments and not a lot of new stories created or progressed.  A couple of new stars may have been made, but overall this WrestleMania feels like one where you have to watch RAW to really see the explosive new stars or stories if there are any.